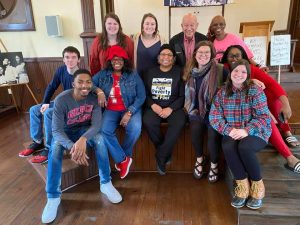 Grace College president, Dr. Bill Katip joined students, and staff recently in a six-day Civil Rights Bus Tour on which the group met several heroines of the civil rights movement. The tour was led by Dr. Todd Allen, founder of The Common Ground Project, professor of communication at Messiah College, and friend of Grace College. The bus stopped at key southern sites of the civil rights movement in Georgia, Alabama and Tennessee.

The tour included time with Rutha Mae Harris, one of the Student Non-Violent Coordinating Committee’s (SNCC) original Freedom Singers in 1962; Lynda Blackmon Lowery, the youngest person to march from Selma to Montgomery in 1965; and Lisa McNair, sister of 16th Street Baptist Church bombing victim Denise McNair. The first-hand narratives these women told were impactful for those on the trip.

“The trip gave a new definition to the word ‘courage.’ The men and women of the civil rights movement were courageous beyond imagination. Meeting these individuals causes you to ask yourself, ‘How am I being courageous in my life today?’” Katip reflected.

The tour stopped in Atlanta at The King Center and Ebenezer Baptist Church where the group attended a Sunday church service. While in Alabama, the group visited The Legacy Museum, the Rosa Parks Museum, the Edmund Pettus Bridge, and 16th Street Baptist Church. The trip concluded in Memphis, Tennessee at the Stax Museum and the National Civil Rights Museum.

For Shelby Chapman, a junior education major, the trip gave her a perspective that she believes all educators should have. “I hope that I can find ways to take these real-life learning experiences and apply them to my classroom. I don’t want to do a simple ‘I Have a Dream’ unit and then move on. I want to do an in-depth civil rights unit and re-create the learning experiences from this trip in my classroom,” said Chapman. “Students need to know more than just the names of these leaders. They need to hear their stories and learn what they did to bring about change,” she said.

Jalen Williams, a junior graphic design major, was also spurred to action. “When you learn that the marches and protests weren’t long ago, it makes you realize that the fight against injustice is still on. I want to make sure that I’m doing my part,” said Williams.

This was the third time representatives from Grace College participated in the tour, but it will not be the last. Kearstin Criswell, director of student involvement, spearheaded the initiative. “We believe the tour is an eye-opening experience to injustices that have shaped our society and culture and that greater understanding will motivate those who attend to work for positive change on our campus,” she said.

Criswell invites community members who are interested in the Civil Rights Bus Tour to join Grace College students on future trips. For more information, contact Kearstin Criswell at criswekn@grace.edu. For more information about the tour, go to www.messiah.edu/info/22915/civil_rights_bus_tour.