A highly respected Indiana basketball coach was honored Saturday night at Grace College during the inaugural Champions of Character Classic at the Manahan Orthopaedic Capital Center. The local online news site, InkFreeNews, carried a report. A portion of that report appears below. Click here to read the complete article.

Rhodes Right At Home In Spotlight 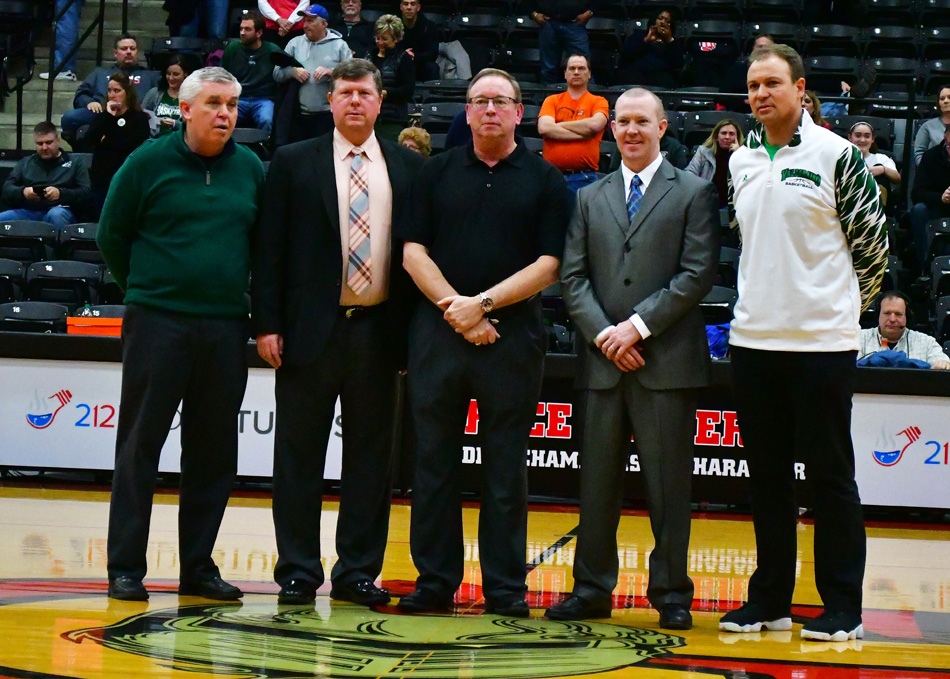 WINONA LAKE – It’s hard to be anonymous in Warsaw when you are Al Rhodes.

The mere mention of his name immediately creates basketball frenzy, not necessarily an immediate response to what happened this week or will next week, but to the glory days that helped paint Warsaw as the household basketball brand it is.

But there he sat Saturday night, patiently and quietly waiting for the call to be honored for his illustrious career and deserved curtain call. Jotting notes down as Valparaiso sparred with Zionsville at the inaugural Champions of Character Classic Saturday at Grace College, Rhodes sat up and away from most of the fans, dressed in all black and only wavering from his note taking to respond to a friend passing by him near the stairs. Rhodes, currently coaching at Penn High School, was just as busy prepping his scouting report on Valpo for when Penn visits the Region this Saturday. As much as the soon-to-be-honor was to be celebrated, Saturday was a work night. Much like the hundreds of scouting nights have been before.

“During the basketball season, you don’t have much time to sit and enjoy things,” said Rhodes at the Manahan Orthopaedic Capital Center Saturday night. “I won’t be scouting the entire night, but with Valpo here and we play them next week (sneaks in a laugh), gotta get a look at them while I can.”

Rhodes, who is as much of a living legend in Warsaw as the town could have, was joined on the Jim Kessler Court before Warsaw’s game with Fishers by some of the coaches who have taken his wisdom and made it their own. The invitational, which easily could have and possibly could be called the Al Rhodes Invite, was formulated by four teams that all have one common tie. Al Rhodes. Warsaw’s Doug Ogle and Zionsville’s Shaun Busick were assistants for Rhodes at Warsaw, Valpo’s Barak Coolman helped Rhodes at Fort Wayne Northrop and Fishers’ Matt Moore was an assistant at Logansport.