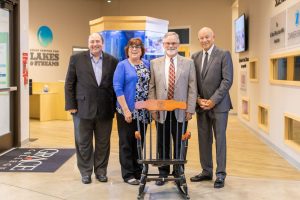 Gene and Wanda Inman recently established a $1.5 million fund for an endowed chair for the science program at Grace College. The chair is the first of its kind at Grace and is designed to help the college recruit and retain high-quality science faculty.

“The endowed chair helps us attract top-notch leaders in the science community to deepen our relationship with the world and to train students in new ways to make positive real-world impacts,” said Dr. Bill Katip, president of Grace College.

Gene Inman attended Grace from 1974 to 1978. He came in as a math major, but partway through his education, he realized he wanted to study chemistry. Although the major did not exist at Grace at the time, Dr. Ray Gsell, one of Inman’s science professors, said, “We’ll have to create such a thing.”

Inman became the first-ever chemistry major at Grace and also helped create a computer team at Grace. His time learning from faculty mentors, Dr. Vilas Dean and Dr. Gsell, laid the early groundwork for his career. “I was encouraged to think about what it meant to be both a scientist and a Christian. I found that my purpose was to be the best scientist I could be, and that has shaped my leadership style to this day,” said Inman.

After graduating, Inman went to the University of Florida to get his Ph.D. in analytical chemistry. This led to a 40-year career in pharmaceutical product development, including 33 years with Eli Lilly. Inman has served 14 years as a technical manager and 13 years as a research and development executive where he oversaw groups of up to 750 scientists. 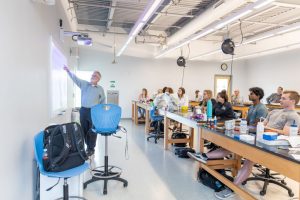 Gene Inman gives a talk entitled, “Development of a COVID-19 Vaccine” in the microbiology lab class at Grace College.

While Inman has accomplished a lot in his career, including the development of many drugs that have helped countless individuals, he is most proud of his leadership philosophy marked by accountability, integrity and character. “These things go hand in hand with my Grace experience,” said Inman.

Even in retirement, Inman continues to generate impact in his field in a consulting, coaching and mentoring role today. He is currently helping develop a COVID-19 vaccine.

“As the first chemistry major at Grace, Inman paved a path and set the bar high for the dozens of chemistry majors who followed behind him. Through his gift, Inman’s legacy will continue to impact our science program. It’s our prayer that the endowed chair would enable us to develop and launch many more excellent Christian scientists like Gene in the years to come,” said Katip.