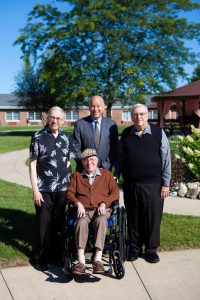 “Dr. Kent had a profound impact on Grace College,” said Grace College President Dr. Bill Katip. “Under his leadership, Grace College and Grace Theological Seminary earned accreditation, making a way for new programs and offerings. Perhaps most notably, he led the institution to see the highest seminary enrollment Grace has seen to this day,” said Katip.

At the age of 14, Kent moved from Washington, D.C. to Winona Lake, Ind., where his father, Homer Kent, Sr., was joining the faculty of the newly formed Grace Theological Seminary. It was in those same teen years that Kent, Jr. determined to read through the Bible every year of his life. He kept that commitment ever since, and his life and work were transformed by it.

After graduating from Bob Jones University in 1947, Kent came to Grace to earn his M.Div. Following his master’s degree, Kent began his 50-year teaching career at Grace, 14 of which he served as the dean of the seminary before being appointed as president in 1975. Over the course of those years, Kent also earned his Master of Theology and Doctor of Theology degrees from Grace.

During his tenure at Grace, Kent was a prolific writer and a respected New Testament theologian and scholar. From 1967 to 1973, Kent served as a translator for the New International Version, and he has authored 15 books, many of them in-depth, exhaustive commentaries on New Testament books. Over the course of many years, Kent translated the New Testament from Greek into his own translation. It was part of his discipline to translate one or two verses a day.

In 1976, the Board of Trustees at Grace approached Kent about accepting the role of president. They cited his qualities of “spirituality, high moral convictions, doctrinal soundness, academic excellence, good judgment, and a sweet reasonableness necessary for a leader.” Although reluctant at first, Kent served as president for the next 10 years. Under his leadership new graduate programs in missions began, a nursing program was launched and accreditation was achieved for the college and seminary.

Kent announced his resignation as president in 1986 but continued to teach at Grace until he retired in 1999 as president emeritus and professor emeritus of New Testament and Greek. That same year, Grace named its newly built residence hall, Kent Hall, in his honor.

Down to his final days, Kent would recount the honor it was for him to teach thousands of students to cherish and exegete the Word of God.

“When I think of Dr. Kent, I think of so much more than his presidential tenure. I think of his unwavering commitment to the word of God and his undying love for his Lord and Savior. I’m certain that today he heard the long-awaited words, ‘Well done, good and faithful servant,” said Katip.

A visitation will be held on Sunday, Oct. 4, from 1 – 4 p.m. at Redpath-Fruth Funeral Home, 225 Argonne Road, Warsaw, Indiana. A memorial service has been set for Monday, Oct. 5, at 11 a.m. at the Manahan Orthopaedic Capital Center, 610 Wooster Road, Winona Lake, Indiana.

Kent’s full obituary can be read at redpathfruthfuneralhome.com/obituary/DrHomer-KentJr.