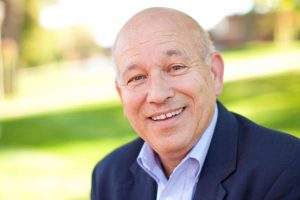 On Monday, Sept. 20, Grace College and Seminary President Dr. Bill Katip announced his plan to retire at the end of the 2021-22 school year.

On Monday, Sept. 20, Grace College President Dr. Bill Katip announced his plan to retire at the end of the 2021-22 school year. Katip has worked in higher education for 47 years, the past eight years as the sixth president of Grace College and Theological Seminary.

“Bill has led Grace College and Seminary with Christ-like character, professional competence and passionate service,” said Daniel Renner, chair of the Grace College and Seminary Board of Trustees. “He is a tireless worker, a strong spiritual leader and has been highly visible and engaged with students. Always pushing to improve, innovate, and elevate Grace, Dr. Katip will be deeply missed, and we couldn’t be more thankful for his faithful servant leadership,” he said.

During Katip’s tenure, he led the institution in a number of groundbreaking initiatives including an accelerated three-year bachelor’s degree program, a four-year bachelor’s and master’s program, and Deploy — Grace’s competency-based seminary program.

Because of these initiatives, and many more, Katip has led the school through some historic milestones, including Aspire, its $40 million comprehensive campaign, and recruiting the school’s largest-ever incoming class of students for the 2021-22 school year.

Known for his collaborative leadership style, Katip has forged the way for many inter-institutional partnerships and strengthened Grace’s reputation at a local, regional and even national level.

“Bill is a leader among his college president peers in Indiana. We all benefit from his optimism and, well, his grace. Even as we faced hard times during the pandemic, Bill reminded us, ‘This is the day that the Lord has made. Let us rejoice and be glad in it.’ His faith always informs his decisions,” said Dr. David Wantz, president and CEO of the Independent Colleges of Indiana (ICI).

“Bill’s personal relationships and integrity have opened doors at the State House and in DC for us to have meaningful conversations with our elected and appointed officials. At ICI, we will feel the loss of his influence in our work to advance private higher education,” said Wantz.

“Bill has been such a dear friend to many and I count Bill as a leading president in the CCCU. I applaud Bill’s tenacity and determination to make Christian higher education an affordable, feasible option for all,” said Shirley V. Hoogstra, president of the Council for Christian Colleges and Universities (CCCU). “In many ways, he has served as an example to other CCCU presidents. Even in the midst of challenging circumstances, he has remained orthodox, steadfast, and optimistic. I’m confident his legacy will continue to impact the Grace community, and Christian higher education at large, for years to come.”

Despite his many accomplishments and the respect he has earned, Katip has always put students first. Katip is known for attending campus events, traveling with students on co-curricular trips, and taking students for a ride on the Grace boat on Winona Lake.

Hannah Dawes, a 2020 Grace graduate, said she owes much to Katip. “If it weren’t for Dr. Katip, I would not have been able to attend Grace College,” she said. “Private education was not financially feasible for my family, but he bent over backward to advocate for me. I will be forever thankful to him for paving the way for me to get a Christ-centered college education,” she said.

Grace College and Seminary faculty have also been impacted by Katip.

Dr. Steve Grill, a long-time professor at Grace said, “Dr. Katip is the most gifted and energetic leader I’ve met in my 50 years of college teaching. His expertise and driving work ethic have taken Grace to a new level of excellence. Our mission is not just something he recites to students, faculty and staff — he lives it out every single day. It has truly been a joy to work with him.”

Katip and his wife, Debbie, look forward to retirement. Katip will be on sabbatical during the 2022-23 school year and will be available to work with the new president in any way that is desired.