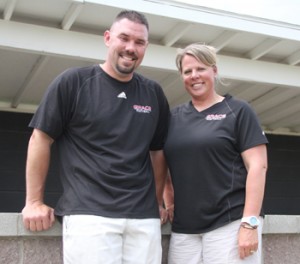 Heach coach Heather Johnson, with her husband Jay Johnson as an assistant, has led the Grace College Lady Lancers to the NCCAA World Series for the second consecutive year. Photo by Josh Neuhart

Grace College softball coach, Heather Johnson, and her husband, Jay, were featured in an article in Tuesday’s Warsaw, Ind., Times-Union. She has worked to rebuild the team and this week they are in Botetourt, Va., for the 2015 National Christian College Athletic Association World Series. A portion of the story appears below. Click here to read the complete story. (Subscription may be required.)

WINONA LAKE – In her six seasons at the helm of Grace College’s softball program, coach Heather Johnson says the Lady Lancers have gone from treading water to righting the ship to where they are now, putting the boat into a higher gear.

Grace is back in the NCCAA World Series for a second-consecutive year, as the Lady Lancers take a 31-25 record and a No. 5 seeding into Wednesday’s opening-round game against No. 4 seed Oklahoma Christian (28-19).

The double-elimination tournament is again being held at Botetourt Sports Complex in Botetourt, Va.

“We’ve come a long way,” said Johnson. “The first three years, we were treading water. In the fourth and fifth seasons, we were righting the ship. This year, we’re putting the boat in a higher gear.”

The Lady Lancers have won five of their last six games, including three victories en route to the NCCAA Midwest Regional championship.

Johnson said this week’s tournament is more business than last year, and that the team isn’t going to be satisfied with just advancing to the national tournament.