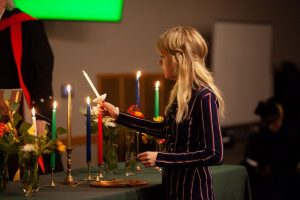 Grace College junior Mackenzie Moeller was awarded a $2,000 Alfred H. Nolle Scholarship through the Alpha Chi National College Honor Society. Only ten such scholarships are awarded nationally each year to students from a pool of nearly 300 Alpha Chi chapters across the United States.

“These are very competitive national awards,” said Dr. Lauren Rich, chair of the Department of Languages, Literature and Communication at Grace College. “This is a great accomplishment for Mackenzie and a great honor for Grace College,” she said.

Moeller is a history major and a creative writing minor from Barrington, Illinois. Moeller was inducted into Grace’s Alpha Chi Indiana Gamma Chapter earlier this year by earning a GPA in the top 10% of students across all disciplines at Grace.

She was nominated for the scholarship by the Faith, Learning, and Scholarship Committee. Moeller’s academic adviser and chair of the Department of History and Political Science at Grace, Dr. Jared Burkholder said, “Mackenzie has been highly engaged with the Department of History and Political Science and with other on-campus groups, such as Back in Five, the creative writing program as well as with Forensics. More than a great student, she is creative and ambitious.”

Moeller was required to submit an original academic paper that reflected interest and understanding in her major. Moeller’s paper, entitled “Barred from Eden: Prejudice, Excommunication, and Sinful Connections in the Moravian Caribbean,” discussed the mistreatment of the freed slaves in the Caribbean by the local church authorities. “I think unpacking the racism tied to laws that barred anti-interracial marriage reveals a lot about the internalized racism and misogyny of the time,” she said.

Moeller was thrilled to receive the news of her accomplishment. “I am so thankful for this scholarship, and I would like to thank Dr. Norris, Dr. Burkholder, and Dr. Rich for helping me grow in my field and for assisting me in refining my research,” Moeller added.

The extra financial support will help Moeller finish her education at Grace. Once she graduates next May, she will begin a screenwriting program in California and apply for graduate programs in creative writing. Moeller’s long-term dream is to work on documentaries and historical films in the future.