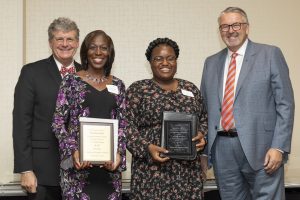 Henrietta Carter, a Grace College sophomore from Muncie, Ind., was one of 30 students honored at the annual “Realizing the Dream” banquet on Nov. 3 in Indianapolis. The event is organized by Independent Colleges of Indiana (ICI), of which Grace College is a part. Each of the honorees is a sophomore student who has “realized the dream” to be the first in his or her family to attend college.

The event is made possible by the support of the Lilly Endowment, Inc. Each honoree received a $2,500 check to help with college costs. Additionally, each student selected a “most influential educator,” who received a $1,000 professional development grant.

One out of every three students on ICI campuses is first-generation. Generous financial aid provided by ICI institutions, combined with state and federal grants, makes a private college education a possibility for all Hoosier students, including Carter.

Carter credits God with directing her towards Grace. “I was planning on pursuing an accounting degree, so when I saw that Grace ranked 2nd for the number of graduates who passed the CPA exam, I knew that it would be a good fit,” said Carter. “The community was simply confirmation. When I visited campus, everyone was so welcoming. I knew that attending Grace would benefit my growth academically and spiritually.”

Now in her second year at Grace, Carter has taken an active role in the Grace community. She serves as a resident assistant in her dormitory, participates in the Women in Business Club, sings in the gospel choir, and holds a job in Alpha Dining.

Carter said she was honored to be selected for the scholarship. She described it as “a reminder that God will not waste my talents, trials or story.”  According to Carter, “Pursing my dream, my hopes for the future and hard work in the present got me to where I am now.  This recognition encourages me to continually pursue growth and maturity.”

Aaron Crabtree, dean of students at Grace College, along with Rhonda Ward, assistant principal at Muncie Central High School, accompanied Carter to the “Realizing the Dream” banquet. Ms. Ward was recognized as Carter’s “most influential educator.”

“Though I never had a class with Ms. Ward, she influenced me in her role as a principal. Seeing her in that position as a black woman empowered me significantly, and thanks to her, I will always remember the importance of my identity as a child of God and have confidence in my background,” said Carter. “She showed me that the most important and memorable lessons are not limited to the context of a classroom.”