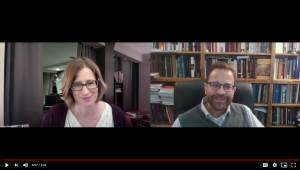 In honor of Native American Heritage Month, on Thursday, November 12, Grace College Program Director for History and Political Science, Dr. Jared Burkholder, led more than 50 students, faculty, and staff in a virtual conversation about the necessity and the challenges of uncovering Native American voices in the past. Burkholder’s presentation described a more realistic version of the pilgrims’ “first Thanksgiving” and highlighted some recent research, including an effort to reconstruct hymns written by Mohican Christians in the 18th century.

“Acknowledging this on campus is important,” stated Kearstin Criswell, director of student involvement, who organized the event. “It’s important because we have students and alumni at Grace with this ancestry but also because Native Americans’ contributions in the early years play a part in how we live today,” she explained.

Burkholder began the conversation with a quote from James W. Loewen, “The antidote to feel-good history is not feel-bad history, but honest and inclusive history.”

“If we did this, the story of the first Thanksgiving would be much darker,” Burkholder said. “Plymouth, formerly known as Patuxet, was an apocalyptic scene when the pilgrims arrived — not a land of milk and honey as it is commonly portrayed. This was the result of a pandemic that lasted several years and decimated native populations along the East Coast,” he explained.

Burkholder corrected a number of other historically inaccurate depictions of the “first Thanksgiving.” He encouraged event participants to wrestle with the former narratives they held to be true.

Associate Dean of Student Diversity and Inclusion Cokiesha Bailey attended the event. “I appreciated Dr. Burkholder taking us through a historical journey that must be revisited,” she said. “It’s a complicated history, one where we must pause to lament but also to celebrate the resiliency of an incredible people — Native Americans, the original dwellers of this land,” she said.

Following his presentation, Burkholder shared an interview he conducted with Dr. Rachel Wheeler, associate professor of religious studies at Indiana University-Purdue University Indianapolis.  Wheeler is nationally recognized for her research, which examines Native Americans and mission communities in the eighteenth century – the subject of her publication, “To Live upon Hope: Mohicans and Missionaries in the Eighteenth-Century Northeast.” Wheeler talked briefly about discovering and then recording a collection of lost Mohican hymns.

Wheeler and Burkholder discussed the challenge of bringing native voices into historical accounts as very few sources of the time period are from Native American authors.

Second-year Grace history student Linden Barcus especially enjoyed the interview. “The conversation with Dr. Wheeler was a reminder that common knowledge American history is often regrettably shallow and that there is much more to history than that which is commonly known and taught,” said Barcus. “I am grateful for people, like Dr. Burkholder and Dr. Wheeler, who seek to introduce others to parts of history that are often overlooked. This information gives us a richer view of our history and the world around us,” she said.

Robinson agreed that reexamining historical narratives is crucial to growth moving forward. “We can grow together by learning to elevate Native American voices, expanding our culture to include the Native American culture and giving an ear to stories and struggles that are often muted,” said Robinson. “Native American people matter, and we praise God for an opportunity to celebrate with them, not just this month, but always,” she said.