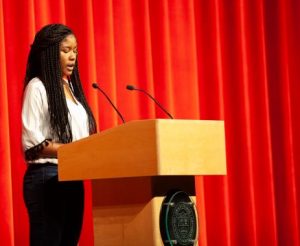 For the fourth consecutive year, Grace College students commemorated the life and legacy of Dr. Martin Luther King, Jr. through React Week. From Jan. 20 – 22, Grace students engaged in a variety of events and experiences to reflect and respond to the purpose of Dr. King’s life and teaching.  These included a luncheon with special guest Kondo Simfukwe, a screening of 11 a.m.: Hope for America’s Most Segregated Hour, and discussion with the film’s producer, as well as Grace’s first-ever “Lancer Chat.”

Monday evening, the Council for Diversity and Inclusion (CDI) at Grace hosted a screening of the film 11 a.m.: Hope for America’s Most Segregated Hour. After the screening, one of the film’s producers led a discussion with students. Meredith Cowman, a senior at Grace, was greatly impacted by the event. “11 a.m. discussed the reality of segregation in church services today. The conversation afterward led me to think about how churches can be more inclusive by embracing diverse styles of worship,” stated Cowman.

The final event of React Week was the first-ever Lancer Chat. A new initiative on the Grace campus, Lancer Chats provide a platform for students to speak about topics that are impacting our society and specifically the college. This chat was centered on the topic of leadership. Students had the chance to hear from three speakers: Emily Anderson, Chandler Buckfeller, and Serena Draper.

Anderson spoke about finding a place in leadership, even if it’s an unexpected role. “I wanted to share on a topic that means something to me in hopes that it would be encouraging to others in a similar situation,” said Anderson. “There are many circumstances that make us feel like we aren’t fit for leadership. And even society says we shouldn’t be in leadership; but I strongly believe that when we follow the calling that God places on our hearts, we will find fulfillment,” she added.

Following Anderson, Buckfeller spoke about the importance of empathy. He went on to say that being with people where they are and caring about them is one of the most worthy pursuits in life. Draper wrapped up the night and charged the audience to give leaders permission to ask questions and struggle with things; just because leaders are in authoritative roles, does not mean that they don’t need space to wrestle. In between the talks, students led discussions at their tables and challenged each other to think more about the topics presented and apply them to their own lives.

CDI Director and junior communications student Kierstyn Worthem organized many of the React Week events. Worthem recognized the value of taking a week to think more about King and his legacy. “It is important to realize that Dr. King’s fight is not over. Minorities still face injustices and challenges every day. It’s not something many people think about often, especially if you are not a minority,” said Worthem. “My hope is that in dedicating this week to Dr. King’s legacy, people realize we have come a long way, but there is still a long way to go. I hope it inspires all people to aid each other in the fight for true justice for all,” she added.

Though Dr. King left an indelible mark on American society during his lifetime, his vision and work remain a powerful force that inspires, challenges, and motivates everyday citizens today.