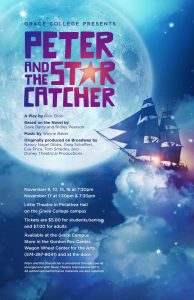 “Peter and the Starcatcher” is an adventure comedy with music that provides the backstory to the legendary Peter Pan. It follows a nameless orphan who ends up in the middle of a high-seas adventure when the ship he is working on is attacked by pirates. He joins forces with Molly, daughter of a famous Starcatcher, Lord Astor, to prevent a chest of mysterious and mystical “starstuff” from falling into the wrong hands. With the infamous pirate Black Stache in hot pursuit of their ship, adventure follows close behind. Based on a series of novels by Dave Barry and Ridley Pearson, the play won five Tonys during its 2012 – 2013 Broadway run.

“I had read the book series, and I was delighted to hear it had been made into a play,” said Mike Yocum, Grace College professor of communication and director of this fall’s play. “I knew it would be a good fit for Grace’s students and stage.”

Ethan Roberts, a sophomore who plays the pirate Smee, says the staging and timing set the show apart. “It’s a small set, but that means we get to be creative as actors,” he said.  “We hope to leave the audience with a sense of optimism from Peter’s journey of self-discovery.”

“The students bring lots of youthful energy to their roles as narrators, pirates, mermaids, birds, and more,” Yocum said. “Their enthusiasm for the characters will bring the story to life.”