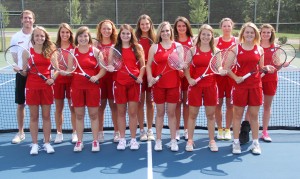 Women’s Tennis Looks for Improvement in 2014

Grace’s women’s tennis has reason to be optimistic in 2014.

Although the Lady Lancers finished 3-8 last fall, Grace returns an experienced roster and added talented newcomers. Second-year head coach Scott Moore is confident the growing pains the team endured in 2013 will make for a stronger, hungrier squad this fall.

“Last year was a learning experience for both me and the girls, and I feel like we are miles ahead this year compared to last,” Moore said. “I have a competitive bunch of girls who are eager to get on the court and compete against other teams. Seeing their passion and excitement fires me up, and we can’t wait to get started.”

Kristin Cassidy returns as the most experienced senior on the court for Grace, boasting 14 wins over her collegiate career. Sarah Hinkel (11 career wins) and Jessica Lokotar join Cassidy as seniors on the squad.

Also returning for Grace is a strong sophomore class of Gabrielle Lawrence, Katie Etter, Mariah Zumbrun, Jayna Huber and Rachel Smith. The class combined to win 22 courts as freshmen, led by a team-high eight wins from Lawrence and six from Etter.

Newcomer Natalia Kurkova (Kyrgyzstan) joins the Lady Lancers as a junior this fall. She has tremendous potential in the Crossroads League and could be the team’s No. 1 singles and doubles player, according to Moore. Returners Julia Marsh and Lydia Marsh round out Grace’s junior class.

Caroline Cassidy, sister of Kristin, will be a freshman for Grace. She was a four-time All-Conference winner at Mississinewa High School and was the No. 1 singles and doubles player on a 19-2 squad in her final season.

“I expect our team to compete every match. We may not win every point, every set or every match, but if we focus on the process instead of the outcome, then we will be there in the end,” Moore said. “I expect the girls to carry themselves professionally and in a way that glorifies Christ.” 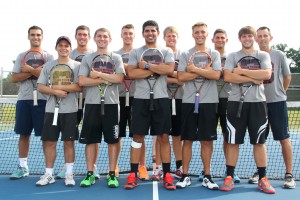 Coming off back-to-back regular season championships in the Crossroads League, Grace’s men’s tennis team has reloaded for another charge at the league title.

Despite graduating three starters from the 2013 squad, head coach Larry Schuh is confident of the Lancers’ depth and ability to keep the pace in 2014.

“I do not sense the guys letting the pressure of being a two-time conference champ weighing them down,” Schuh said. “Part of that is confidence and part of that is because our players simply play fearlessly. They are not afraid to fail.”

Leading the team is returning No. 1 singles player Daniel Sanchez. The senior earned First Team All-League honors after posting a 6-2 record in singles and 6-2 record at No. 1 doubles.

Jose Marval is set to play a major role in his junior season, coming off an impressive 2013 campaign. Marval was a First Team All-League selection after finishing 7-1 at No. 2 doubles and 6-2 at No. 2 singles.

Other returners with experience include juniors Ricardo Bedon and Ethan Grove and sophomores David Driscoll, Jacob Stump and Gabe Vervynckt.

Schuh, a two-time CL Coach of the Year (2013, 2009), brought in two international players for the fall season. Sophomore Uros Pajic (Serbia) played his freshman season at NCAA Division I Chicago State and will likely play at No. 3 singles and No. 2 doubles in 2014. Freshman Danila Kourkoulin was a standout tennis player from Haifa, Israel.

Although the Lancers have high hopes of continuing their league success and advancing to NAIA Nationals, the Schuh-led Lancers are dedicated to remaining true to their mission.

“The goals and expectations every year center around going to nationals, but those expectations are embedded in doing it the right way,” Schuh said. “We see tennis as a means to glorify God. If we are winning but not reflecting Christ on the court, it is a vain pursuit and a meaningless result. But to win and to bring attention to Christ at the same time will enrich the winning experience while seeking first His kingdom.”