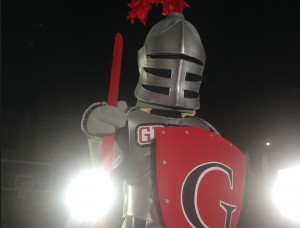 After a month-long process of collecting names and submissions from Lancer Nation, Grace has revealed its new mascot – Sir Red.

Sir Red is a state-of-the-art, full-bodied knight with breathable, flexible and moveable mesh armor. He features a detachable and extendable lance and a shield to both protect Grace’s home court and attack any opposition.

Besides being the Lancers’ official color, red has historical significance for the Lancers. Grace’s athletic teams were first represented by the seminary, dubbing themselves the Ambassadors with the colors blue and gold. When the college decided to establish its own athletic identity, it decided on the color red. Lancer Nation was officially born.

“You have sworn to uphold the chivalry — its honors, rights and privileges; to remain faithful and loyal to the fans and athletes of Grace College; to uphold the principles of sportsmanship; to rally inimitable school spirit, and defend its honor to the end.

By your deeds and demeanor, you have earned the right to a place on our field. Having fulfilled the requirements of boundless energy, mesmerizing personality, and agility in armor, and having had your qualifications spoken to, and been clothed in your vestments, I hereby bestow upon you the accolade of Knighthood.

Ergo, it is before the assembled nobility and faithful Red Zone compatriots that I do deem thee SIR RED, mascot of Grace College. Go forth and rally our teams to victory!”