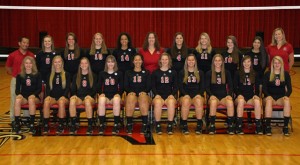 Grace College’s volleyball team punched its ticket to 2014 NCCAA Nationals with a convincing 3-1 victory over Oakland City on Thursday.

The Lady Lancers (27-10) will make their third trip in four years to Kissimmee, Fla., thanks to the three-headed attack of Calah Kruse, Tori Bontrager and Sierra Smith.

The win marks the first time in program history where a four-year class has earned three trips to a national tournament.

In the opening set, the teams battled back and forth until Grace gained separation at the midway point. The Mighty Oaks (16-9) fought back to within two points of Grace’s lead, but Grace eased away to a 25-19 win on a kill from Sierra Smith.

Oakland City jumped ahead early in the second set and never looked back. Grace battled off two set points before ultimately falling 25-21.

The Mighty Oaks again led from the start during the third set, claiming a 6-2 lead. The Lady Lancers responded with an 8-2 run to grab the lead at 10-8. Grace scored four straight points to break open a 14-14 deadlock. Another timely 5-1 run late in the game gave Grace the cushion it needed, and Kari Feddema‘s kill down the line won the set 25-20.

The Lady Lancers made short work of the Mighty Oaks in the fourth set, winning 25-15 on a service ace from Jessica Scherb. Grace’s offense cruised along with 12 kills on just two errors in the set.

Check back at GCLancers.com for updates on the NCCAA tournament field and opponents.