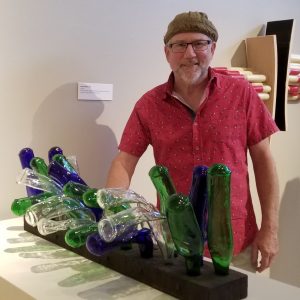 Mark Bleshenski, a Michigan-based studio artist, will present works from his PLUMBUM series, as well as his new glassworks, on Sept. 16, during the opening reception for his exhibit at Grace College.

Mark Bleshenski, a Michigan-based studio artist, will present works from his PLUMBUM series, as well as his new glassworks, on Thursday, Sept. 16, during the opening reception for his exhibit at Grace College. The reception will take place in the Art Gallery of Mount Memorial Hall, 1 Lancer Way, Winona Lake, Ind. Bleshenski will give an artist talk at 7 p.m., and the reception will follow until 9 p.m. The community is welcome to attend the free event.

Bleshenski works with a variety of mediums including glass, wood and mixed media.  His independent study of techniques in glass fusing, casting and flameworking have been featured in art publications, galleries and juried exhibitions throughout the Midwest.

Bleshenski’s current work focuses on the re-purposing of discarded bottles into multi-media sculptures. With his background in human environment and design, his work explores glass and its relationship to humans on a psychological, social and cultural level.

“I have always been fascinated with common objects made by man and reshaped by the forces of time, man and nature,” said Bleshenski. “I manipulate and combine these objects with constructions into something completely new and hopefully unexpected and intriguing to the viewer,” he said.

“We are very fortunate to have Mark’s work showcased in our Art Gallery,” said Kim Reiff, chair of the Department of Visual, Performing, and Media Arts at Grace. “After seeing his work from the PLUMBUM series several years ago, I began showing his artwork to my students as an example of how art can bear witness for the artist as a caretaker. Mark’s unique glass forms allow us to see the things that he cares about in a new way. In this case, we may acquire a new understanding of our cultural relationship to the natural environment,” she said.

Bleshenski earned a bachelor’s degree in human environment and design from Michigan State University and studied in the summer program of Decorative Arts and Architecture at the University of London in Great Britain. After graduation, he founded Markroy Studio, where he followed in his grandfather’s footsteps and created stained glass and cast glass windows for dozens of churches, commercial buildings and homes around Michigan.