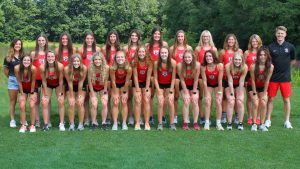 With the majority of the team returning and a strong incoming class, the chance to keep climbing is certainly available for the Lancers. Third-year coach Jacob Poyner hopes that climb culminates in a first-ever team appearance in the NAIA championships.

“These ladies stand at a really special point in school history as this may be the first time we’ve had the depth and competitive drive across the board to go into uncharted territory like this,” said Poyner. “The name of the game for us this summer and fall has been the mantra: Mentality before Reality. They’ve convinced themselves they can be the first to really take a crack at the big dance, and we’re going to have a blast chasing that this fall.”

Leading the climb will be a pair of All-Crossroads League performers. Heather Plastow (18:47), the lone senior on the squad, placed 58th out of over 300 runners in her first appearance in the NAIA national cross-country meet. She went on to earn All-American honors during the track season. Sophomore Mallory (18:35) Hiatt produced a memorable rookie campaign a year ago, placing 9th in the Crossroads League—the second-best freshman in the league—and competing at the national level.

Junior Elizabeth Moore (20:25) will be a key performer in 2021. She was the No. 3 runner a year ago and showed marked improvement throughout the track season, running 18:49 in the 5k. Fellow juniors Kaelyn Johnson (20:07) and Weslea Arthur (21:03) were in the top seven last year, while Tara Friesen (21:50) ran well during her first-ever season of cross-country and continued to improve during the spring. Junior Michaela Buriff, the league champion in the 400 hurdles in track, also returns.

In addition to Hiatt, several members of sophomore class are expected to contribute this year. After gaining experience during their initial college cross country seasons, most demonstrated significant improvement during the spring track season and hope to carry that over into the fall. Anna Hulstedt (21:25) and Ellie Wagoner (21:39) had the most success a year ago. Madelyn Skidmore, Emma Lingenfelter and Madison Schneiderwind are back, and should show continued development.

“As thrilled as our coaching staff has been for these ladies to be able to race again, we’ve never had to remind them of what matters most,” commented Poyner. “They know that who they are to each other and to others on campus based on their heart, their character, and commitment to being systematically heroic day-in-day-out is what’s truly important.

“It will be a different race for each of these ladies when the gun goes off. Everyone must win her own race for this team to achieve its dreams, but I am confident they are fit for anything that comes their way.”

A group of nine newcomers gives Coach Poyner his largest ever roster and provides additional quality and depth. Highlighting the incoming class is Kylie Sauder (Archbold HS – Ohio) who placed in the top 20 in her division in Ohio for three straight years and ran 18:56 as a senior. She was also the state runner-up in the 800 during track season, posting a time of 2:15.88.

“Our newcomers know all about the opportunities in front of us because it’s built into our recruiting process,” said Poyner. “I’ve never seen a group of ‘strangers’ connect so quickly upon their arrival in Winona Lake. These ladies have set a high standard for each other, and their desire to be difference-makers will crucially impact this team, on and off of the course. Good things happen, both internally and externally, when you desire the right stuff, put in the work, and have faith in the bigger picture.”