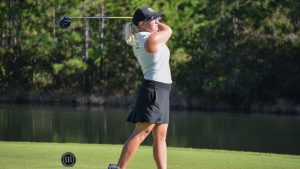 The team spent several weeks in the NAIA national polls during the 2020-21 season, reaching a program high of No. 17 in the early spring of 2021, and ending the year ranked No. 26. The last at-large team invited to the NAIA National Tournament was ranked No. 19 in the final poll, leaving the Lancers seven positions short.

The near-miss of a national tournament berth will serve as additional motivation as Coach Duncan sends an experienced and deep squad to the links for the 2021-22 season.

“On paper, this is easily our most talented team,” said Duncan. “We have lofty goals and expectations at both the conference and national levels.”

Helping the Lancers reach for those goals is the return of the top three players from last season, along with an extremely talented incoming class.

“It’s our expectation that team depth will be a huge strength for us,” said the seventh-year head coach. “For the first time in program history, we should have six players capable of leading the team in scoring at any given event.”

Four other players return with significant experience. Juniors Abby Slabaugh, Abigail Fishel and Brittney Klotz, plus sophomore Hannah Godfrey will continue to battle for spots in the team’s top five.

The addition of five new players raises the level of Coach Duncan’s optimism. Three of the new golfers come from the high school ranks, led by Grace May from Hoover High School in North Canton, Ohio. She is a four-time state qualifier and has won numerous Junior PGA events in her area. Also arriving in the freshmen class are Riley Stewart from Pickerington Central High School in Ohio, and Sydney Cesare from Frankfort High School.

Two graduate transfers are expected to make an immediate impact for the Lancers. Summer Stillson earned Indiana All-State honors at nearby NorthWood High School before attending Saint Mary’s College. She was a three-time MIAA All-Conference player at Saint Mary’s and twice played in the NCAA Division III National Championships. Sloane Winders comes to Grace from NCAA Division I IUPUI. In three years of college competition she boasts a scoring average of 79.8. Winders led Martinsville (Ind.) to a sectional championship during her high school years.

“It will be extremely important that we come together as a team and adopt an attitude of selflessness,” said Duncan. “Some players may face reduced roles and others will need to adjust to a new culture. I admire the character of our team, and I expect great things from them.”

According to Coach Duncan, a key to reaching the team’s goals will be consistency in tournament play.

“We will need to show we can post low scores in multiple rounds in order to reach our potential. We’ve shown in the past that we can beat about anyone on a given day, but now we need to put great rounds together in two or three-day events.”

The Crossroads League Championships and a potential berth into the NAIA National Championships will happen during the 2022 spring season.