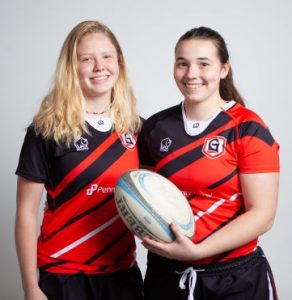 Grace College student athletes Olia Greathouse and Kaylee Houghton were recently named to the National Small College Rugby Association (NSCRO) Ohio Conference All-Star Team. After a try-out and team practice in Ohio, Houghton and Greathouse traveled to St. Petersburg, Florida, on Jan. 17 to be honored for their high level of play in the league and to participate in the all-star tournament.

“Kaylee and Olia are great athletes and leaders on our team. They are well-deserving of this honor, and I’m glad they had the chance to travel to Florida for this occasion,” stated Tyler Scott, Grace College Women’s rugby coach.

Greathouse, a freshman exercise science major, is a Lakeville, Indiana, native. She was originally drawn to Grace College because of the opportunity to play JV volleyball. She liked the community and wanted to attend a small Christian college; rugby was not originally on her radar. “I participated in volleyball, track, and swimming,” said Greathouse. “But I had never even considered playing rugby,” she laughed.

During Grace’s annual Welcome Weekend in August, Greathouse noticed a table recruiting for the rugby team. Out of curiosity, she wrote down her name and email address but soon forgot about it. Shortly after, Greathouse was approached by a student, Kaylee Houghton, in the cafeteria. Houghton wanted to know if Greathouse was interested in playing rugby. The rest is history.

Greathouse was surprised to be chosen for the all-star team and was pleasantly surprised by the amount of playing time she received as a first-year player. “Our time in Florida was great! I didn’t know what to expect as a first-year player in the tournament, but I started most of the games,” Greathouse remarked. Set to graduate in 2022, Greathouse looks forward to where the next three years of rugby might take her.

Houghton, a senior Bible translation major, is from Cobourg, Ontario, Canada. She chose Grace because of its Bible translation program. Houghton has felt called to Bible translation since eighth grade. After looking at several schools in her area, Houghton found Grace. At the time of her enrollment, the rugby team did not exist.

“I started playing rugby in my senior year of high school,” said Houghton. “That was the year my school cut contact football, and I was looking for another contact sport to play,” she explained.

During her second year at Grace, when she heard a rugby team was forming, she was thrilled. Houghton took it upon herself to recruit nearly three-quarters of the team. Naturally, she became the team’s captain. And as the only player with previous experience, it wasn’t a surprise when she was scouted to play in the all-star game.

Houghton’s highlight in Florida was meeting more of the rugby community. “Rugby is a game where you hit each other really hard on the field, but as soon as the game is over, it’s a lot friendlier. One of the best parts of Florida was being able to make friends with the teams that we will play against in the spring,” said Houghton. “There is something about playing the game of rugby that just bonds people,” she added.

The Grace Women’s Rugby team continues to grow and is looking to expand its roster. “A common misconception is that you have to be a certain size or shape to play rugby. But we need all types, everyone can find a position to play on the rugby field,” Scott said. The Grace team plays several tournaments in the fall and spring season as part of the Ohio Valley Women’s Collegiate Rugby Conference.