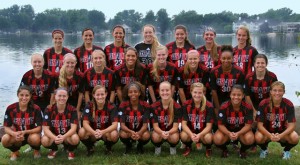 Saturday’s contest was played in Fort Wayne at the University of St. Francis due to rough playing conditions at Miller Field.

Although Grace controlled the match from start to finish with a 26-3 advantage in shots, the Lady Lancers didn’t net the game-winning goal until the 83rd minute.

Meredith Hollar found Mallory Rondeau at the 82:13 mark for a 10-yard strike to beat Cedarville’s goalkeeper. Hollar found her own goal in the 88th minute, blasting home a shot from close range to secure Grace’s annual migration to Florida.

The Lady Lancers will find out their seed and tournament draw in the coming days for NCCAA Nationals. Grace will be hoping to improve on last season’s semifinalist finish, which was the best in program history.

“The women played some pretty good futbol today. The weather made it a difficult week to stay sharp. We maintained good discipline in possession and were dangerous offensively, but we needed a higher quality of finishing,” said Grace head coach Michael Voss. “It’s rewarding to qualify for the NCCAA national tournament. It’s a fantastic Christian event.  It’s also been very competitive the last few years we’ve been there. We are proud to be a member of the NCCAA.”

In the opening minutes of the game against Cedarville, Grace foreshadowed its dominating performance in the match. Grace fired three shots with a corner kick before six minutes had expired and did not let up for the rest of the half.

The Lady Lancers (14-4-3) took 15 shot attempts with three corners in the first half compared to one shot and one corner for the Yellow Jackets (10-8-1).

Grace tallied 11 more shots in the second half before eventually breaking through with two goals in the final eight minutes. Heather Martin nearly netted the game winner in the 60th minute with a shot that went off the crossbar.

Hollar was an offensive force throughout the game, tallying eight shots to go along with her goal and assist. Rondeau finished with five shots, and Martin and Kaitlan Wiles took three shots apiece.

Grace has advanced to NCCAA Nationals four straight years and five times in six seasons. Before Coach Voss’s arrival at Grace, the Lady Lancers had reached two national tournaments in their 11-year history.