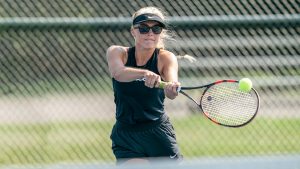 The Grace College women’s tennis team enters the 2021-22 season on the heals of another stellar campaign. Despite the setbacks and delays caused by COVID, the Lancers tied a school record with 14 wins a year ago and finished third in the Crossroads League for the third straight year. Coach Marcus Moore was voted the NCCAA National Coach of the Year at the conclusion of the season.

Coach Moore, who enters his fifth season at the helm of the program, knows that to keep the winning ways going, the Lancers need to replace three regular players, including two-time All-Crossroads League honoree Dayana Ortega.

“We can put quality players at every spot from number one to number six singles,” said Moore. “That gives us a great deal of depth, and that depth should provide an advantage in many matches.”

Six players return for Grace, while two newcomers arrive to battle for spots in the lineup.

Senior Morgan Mast has the most experience on the squad. She enters her final season with a 36-16 career singles record and a 27-12 record in doubles play.

Three juniors will figure heavily in the rotation. Gretchen Adams has excelled in doubles play in her career, posting a 24-9 overall record, including a 12-3 mark last season. Kiersten Martin went 13-2 a year ago in singles, while fellow junior Lauryn Riegsecker posted a 15-3 singles mark.

A pair of sophomores also return, led by Anna Graves. She produced an 11-7 singles mark in her first collegiate season and added a 13-4 doubles record. Addy Jarvis saw action in five matches, going 3-2 in doubles and 2-2 in singles.

“Our team chemistry will be outstanding,” commented Moore. “From a coach’s perspective, this is something that is so valuable for our overall success. Our girls enjoy spending time with each other outside of tennis. Even though it’s hard to calculate that into on court production, I know it will help.”

Moore lists continued success in doubles play as one of the keys to a strong season.

“Doubles has been a strong area for us, often being the difference in matches,” said Moore. “All three players we lost were good doubles players, so we will need to continue to work with our pairings. Getting the freshman adjusted to doubles and the college game will be important.”

“I’ve never gotten more messages from our returning players on how excited they were to get started,” added Moore. “They were all incredibly anxious to get back on campus and get rolling. I love coaching those who are invested in something special.” — from gclancers.com