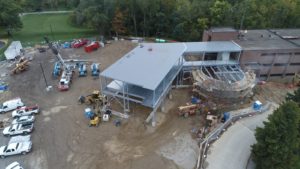 The Dr. Dane A. Miller Science Complex, now under construction, is a feature project of the Aspire Campaign for Grace College and Seminary.

The Aspire Campaign for Grace College and Seminary has reached $30 million in giving. The comprehensive campaign, which launched publicly this spring, endeavors to raise $37 million to make Grace an exemplary, Christ-centered education community characterized by innovation, affordability and real-world preparation.

“We are very encouraged by the campaign’s progress up to this point,” said Dr. Bill Katip, president of Grace College and Seminary.  “For the past several months, I and others have met with alumni and friends all over the country to share our vision and raise interest in the Aspire Campaign.  The response has been terrific.”

While fund-raising continues, construction is underway on campus. The Dr. Dane A. Miller Science Complex is one featured project of the Aspire Campaign.  Slated for completion in summer 2018, the Science Complex is named for former president and co-founder of local orthopaedic giant, Biomet. The late Dr. Miller and his wife, Mary Louise, were, and Mary Louise remains, ardent supporters of Grace College and advocates of science and education.

Over the summer and this fall, the Science Complex foundation was laid and the steel frame was built for the new addition. Exterior construction continues as remodeling of the existing science building is also underway.

“This wouldn’t be possible without the generous donations of many people,” said Dr. Nate Bosch, director of the Lilly Center for Lakes and Streams and professor of environmental science at Grace College. “Recently, we’ve been particularly blessed with two major gifts for the Science Complex – one from the Deister family and another from a group of medical professional alumni families.”

Mark Deister, president of Deister Machine Company in Fort Wayne, and his wife Cindy have personally committed $450,000 to fund space for the Lilly Center in the complex.  Mark and Cindy have designated $300,000 of this gift as a matching opportunity for local businesses and lake residents to ensure that the Lilly Center meets its fundraising goal for the complex by the end of the year. The Science Complex lobby will be named in their honor.

Mark and his cousin, Irwin Deister, who is the chairman of Deister Machine Company, have also committed $100,000 as a company to help with the complex.

The generous giving of these individuals and many more have brought total funds raised for the Dr. Dane A. Miller Science Complex to well over $7 million of the $8 million project, and total campaign giving to more than $30 million.

“We couldn’t be more pleased with the progress of the campaign so far,” commented Drew Flamm, vice president of advancement at Grace College and Seminary.  “We praise God for his faithfulness and thank each person and family who has donated to our efforts.”

To learn more about the Aspire Campaign for Grace College & Seminary and to make a donation, visit grace.edu/aspire.