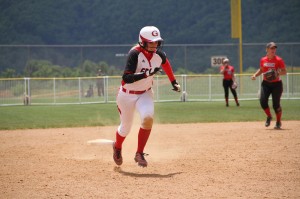 Shell was named NCCAA First Team All-American and honorable mention NAIA All-American after an outstanding season. She set three single-season records in 2014, including the most hits (94), most runs (64) and most stolen bases (38) in team history. Additionally, Shell moved into a tie for first place among Grace’s career stolen bases leaders with 59 and sits in second place for career hits with 171.

Shell was also named to CoSIDA Second Team All-America® for her athletic and academic prowess. She along with Becky Almack were Daktronics-NAIA Scholar-Athletes as well.

Freshman pitcher Hannah Adams earned a spot on the NCCAA All-Tournament Team as the Lady Lancers enjoyed their first postseason trip in 17 years.

After the regular season, Shell and Knight were named First Team All-Crossroads League and Adams was honorable mention for All-CL status.

The Lady Lancers racked up 29 wins this spring, signifying the highest win total since 1994. Grace also had its most league victories for a season with 19 and finished fourth in the CL.