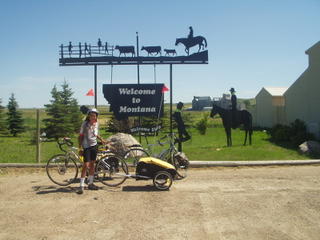 Today’s Warsaw (IN) Times-Union newspaper carries a feature story on Pardee A. Gunter, a 1969 Grace College grad with a B.S. in Elementary Education, who with his son is retracing on bicycles the route of Lewis and Clark on the 200th anniversary of their original voyage. Here they are shown just entering the 670-mile stretch across Montana. Here is the Times-Union article:

Pardee Gunter, of Leesburg, and his son Tai bicycled 1,680 miles on the Lewis and Clark Trail this summer.

The pair picked up where they left off in 2004, in Kansas City, Mo., and traveled for 40 days, ending in Lewiston, Mont.

Pardee has been biking for 25 years. A lifelong Leesburg resident, he biked to Atwood when he was the principal there. Now he cycles from Leesburg to Washington Elementary school where he teaches sixth-grade English. Tai, who transferred to Washington, rides to school with his father.

Because they ride regularly, the pair didn’t train especially for this leg of the trip.

The first stage of the Gunters’ trip began last year, the 200th anniversary of the trail. The father and son rode from St. Louis to Kansas City. The two-week trip was self-funded.

This year, Pardee was awarded an $8,000 Teacher Creativity Fellowship Program grant from the Lilly Endowment. His was one of 100 awards out of 1,000 applications.

He purchased Giant OCR touring bikes, trailers, bike repair equipment and other goods for the trip. The Gunters logged more than 1,000 miles on these models before restarting the Lewis and Clark Trail this summer.

At age 58, Pardee said the rides took their toll on his body. They started out June 13 and returned to Leesburg July 25.

“I’m really old enough to know better. I didn’t think North and South Dakota would be so hilly,” he said.

Nor did he think Montana would be so desolate.

“Towns are 50 to 60 miles apart. That’s an hour in a car, all day for us. We would ride and see nothing but prairie. Not even a tree.”

Pardee towed 60 to 70 pounds in a trailer attached to his bike; Tai pulled 30 to 35 pounds. The trailers contained clothing, tents, extra tires and packages of freeze-dried food.

Throughout the trip the Gunters referred to section maps published by Adventure Bicycling. The maps profile the roads giving distances from town to town, road conditions, points out features and what kind of traffic volume bikers can expect. Riders are directed off the main roads. The maps list campsites, hotels, restaurants and other points of interest.

They met few others traveling on a bike.

One man they met was from Washington state. He had planned to travel the entire trail, beginning in St. Louis and ending in his home state, a 12-week journey.

The Gunters traveled at a slower pace, taking in historic landmarks and the scenery.

At campgrounds they were often the only “tent campers,” surrounded by RVs and mobile homes.

Strangers would give them cold water and soda, welcome thirst-quenchers. Pardee said traveling with enough water was always a concern.

The Gunters had a good idea of what to take along from the 400 mile ride through Missouri last year.

One thing they started with, and quickly repacked, was a sextant. Pardee never figured out how to use it. The GPS system recorded longitude and latitude with a press of a few buttons.

Washington Elementary school teacher Judy Kinsey and her husband Mike met the Gunters in Mobridge, S.D. The Kinseys were on vacation. They brought a resupply of food and collected things the Gunters wanted to send back.

In the end the Gunters traveled with two sets of clothes, making laundry necessary at about each stop, but making a lighter load to pull.

There were days when they faced 30 mile-per-hour headwinds, but mostly, Pardee said, the wind was at their backs.

The ride from Fort Peck to Jordan, Mont., was their longest – 98 miles. There was nothing along the road except a rest stop, 68 miles out of Fort Peck.

Although it was often hot, the heat was “dry.” Rain storms shortened their road some days, but they took just three days “off.”

At every opportunity, either at a public library or in a hotel room, Pardee “SpokeWrench” and Tai “ClarkWheel” logged onto blogspot.com and recorded observations and progress. The Internet journal is at www.lewisandclarkcycling trek.blogspot.com

Pardee said comments from the Washington school staff indicated they followed their associates on the trip.

Pardee’s wife, Toshiko, said she’d grown used to being by herself during the six weeks her husband and son were gone.

One of the first things the travelers did when they got home, Toshiko said, was reacquaint themselves with the refrigerator.

Pardee and Tai’s plans are to finish the trip next year, if a grant can be secured for the third stage of the Lewis and Clark Trail.