A Grace College graduate has taken the helm at Habitat for Humanity of Kosciusko County, according to a report published Friday in the Warsaw, Ind., Times-Union. A portion of the story appears below. Click here to read the complete article.

Logan Goes From Volunteer, Employee To Director Of Habitat 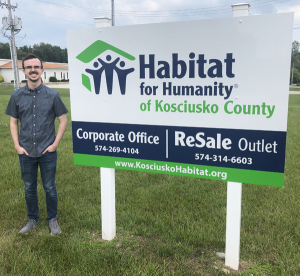 Ben Logan became the executive director of Habitat for Humanity of Kosciusko County in May. Photo by David Slone, Times-Union.

A class project done while a student at Grace College resulted in Ben Logan volunteering at Habitat for Humanity of Kosciusko County.

Originally from Marion, Logan graduated from Grace where he earned a bachelor’s degree in environmental science. He is finishing his last course this summer for Grace’s Masters in NonProfit Management program.

“I came up here to study at Grace College and found my passion for nonprofit work, found my wife (Abby) and now we live here,” he said in an interview Wednesday afternoon.

Logan’s first connection to Habitat was the Warsaw affiliate.

“It was actually with a class project with Grace for something totally unrelated, but I actually started volunteering here through that, and when a position in the store opened up for part-time help – since I was still a college student – I say, ‘Yeah, I can do that. I really like working with the people here and the volunteers here. So I started working part time in the store,” he said.

When the position for executive director opened up, he took a shot and applied.

“They thought that I apparently had the ability to learn what I need to learn, grow into this position. Obviously, I’m young and don’t really carry formal experience. But the idea is that I have longevity and an eagerness to learn,” he said.

Logan stepped into the role as executive director in late May.