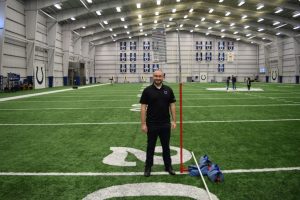 Sports are (and always have been) a passion of Noah’s. That’s why the first time he stepped foot on campus, it was for a middle school soccer camp, and why he was a four-year track athlete at Grace. So choosing a major was a no-brainer for Noah.

“Sports have taught me valuable skills like how to take instruction from others, how to show up on time, how to work with a team and how to be a leader. I knew I wanted to do something with sports because I wanted to give that same experience to others,” Noah stated.

On the first day of school, Noah walked into a Sport Management class taught by Dr. Johnson. Before a book was opened or a lecture was given, Johnson taught his students to be a P.R.I.Z.E. — People-Oriented, Responsible, Innovative, Zealous, and Exceptional.

“I kind of laughed it off at first,” Noah admitted, “But slowly, over the years I’ve realized that these attributes are truly what people are looking for in the sports industry.” Since day one, the skills he needed to thrive were right in front of him. Four years later, and Noah is using this acronym every single day as he works for the Indianapolis Colts.

Senior year of college came around, and Noah, as most seniors do, began to think about his plans after school. His original goal to become an athletic director shifted to the difficult pursuit of the professional sports world. He knew this was a hard road. People warned him that competition is stiff, walls are thick, and networking is key.

However, Noah was not alone in this endeavor.

Grace’s Center for Career Connections helped connect him with a Career Fair at Bankers Life Fieldhouse with the Pacers. He got to meet countless people in the industry and put his name on their minds. But Noah’s efforts didn’t end there. He went home and connected with them on LinkedIn. These connections led to many conversations and valuable words of wisdom. Noah explained, “One piece of advice I received was to start low and move your way up. Take any in you can get.”

Noah took that advice and ran with it. He soon applied for and accepted a game-day position selling 50-50 tickets. After claiming the title of “top seller” 3 weeks in a row, he approached his manager about moving to a sales position.

Now, Noah works in ticket sales for the Colts and is loving it.

“Even though it’s a large organization, it somehow feels like a family-owned business. Everyone is so supportive,” exclaimed Noah. His favorite part of the job is when people who he has watched on ESPN and admired for years casually walk past his desk as his colleagues! “It’s surreal that I now know who they are!” Noah exclaimed.

From this position, Noah hopes to move into some of the high priority sales calls. With his exceptional work ethic and zeal to succeed, we have no doubts he will go far — something that Dr. Johnson would be proud of.

Now that Noah is immersed in the workplace, he reflects back and recognizes the preparation he received in college, “Grace taught me to view work as a gift from God. Being able to go into a workplace with that mindset really sets you apart.”

Noah specifically recalls the words spoken to him by another beloved professor, Chad Briscoe, instructor of the Sport Ministry course, “No matter where you go, there is a ministry opportunity — whether you are a janitor or a CEO, you can make an impact.” – from grace.edu