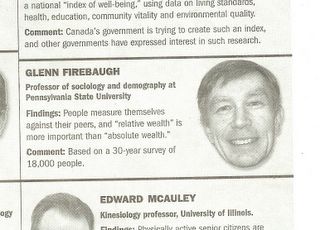 The Saturday, March 18 edition of the Wall Street Journal featured a front-page article in its “Pursuits” section on “Happiness Inc.” in which it featured a number of scientists exploring the roots of joy, and how companies are putting the findings to work.

One of the experts featured was 1970 Grace College grad Glen Firebaugh, who is now professor of sociology and demography at Pennsylvania State University.

Firebaugh’s comments were based on a 30-year survey of 18,000 people in which people measure themselves against their peers, with the finding that “relative wealth” is more important than “absolute wealth.”