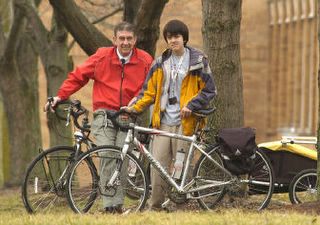 By Becky Manley
The Journal Gazette

This summer, Pardee Gunter and his son, Tai, will bicycle about 1,000 miles from Lewiston, Mont., to the Pacific Ocean, following the trail blazed by explorers Meriwether Lewis and William Clark more than 200 years ago.

The Gunters have already logged about 2,100 miles in their cross-country effort over the past two summers. This summer they will tackle some challenging terrain before they catch a glimpse of the blue waters of the Pacific.

But the past 2,100 miles haven’t always been that easy, either.

The Midwest had more hills than expected, Gunter said. Those hills became monsters in the Great Plains, with a brisk headwind tossed in for good measure.

Then there was the weather–last summer had days of over 100-degree heat reflected off merciless asphalt with no shade in sight. Then there was the fury of a storm that seemed determined to uproot the Gunters’ tent.

Despite the challenges, the Gunters traveled 20 miles on slow days and up to 100 miles on others.

“It just depended on the wind and the terrain,” said Gunter, who is a sixth-grade teacher at Washington Elementary in Warsaw.

Gunter’s interest in the travels of Lewis and Clark began when he was in elementary school. He read a story about the difficulty the mapmakers faced when confronted with a split in the Missouri River. The river’s split forced the explorers to divide their troop in two so each group could travel up a fork to determine the river’s true path.

The Gunters have it a bit easier. They have maps, roads, a GPS unit and the occasional hotel bed and shower.

Lewis and Clark had hunches based on rumors, wild terrain, even wilder animals, and a sextant.

Gunter said he and Tai tried their hand at navigating via a plastic sextant he bought at the bargain price of $35.

“We never figured that out,” Gunter said, adding that they decided to attribute the failure to the cheap sextant, thereby absolving the operators of any blame.

Tai, who is a seventh-grader at Edgewood Middle School, said he doesn’t share his dad’s fascination with Lewis and Clark, but he does share an interest in biking.

It seems that for Tai, this trip is more about the destination than the journey.

While on the road, he said he focuses on “just getting over the next hill.” He looks forward to the end of the trail because then he’ll “know I’ve done the trip at that point.” As for the difficulties of a long-distance trek, so far he’s found them not so difficult.

“I thought it would be harder than it was.”

Though the two traveled in relative solitude in 2004, last year they had company of sorts via a blog they updated from uplinks in hotel rooms and libraries. The blog allowed Gunter’s students to travel along the trail through photos and a journal.

The students were also challenged by daily questions about the geography and culture of the regions the Gunters visited.

In one blog post, Spokewrench describes the day’s tour through a portion of Montana as “nearly 100 miles of nothing.” Clarkwheel speaks of his son’s efforts to photograph elusive antelopes. One posted photo shows an angry prairie dog chiding Spokewrench for invading its turf.

The blogging plan allowed Gunter to successfully apply for a Lilly grant that helped to pay for last summer’s trip. About a third of the cost of this summer’s trip will be paid for by a $1,000 grant from the Indiana Humanities Council.

This year, the Gunters will share their journey not only with students, but also with the Warsaw community through presentations to local groups. The project is dubbed “Lewis and Clark at the Speed of a Horse.”

Perhaps the best sharing is taking place between father and son. Pardee Gunter said the unique survival situation of the long-distance bike trip forces the two of them to act more as partners rather than as father and son.

“It’s a unique kind of bonding,” Gunter said. “It cements a relationship when you work together like that.”