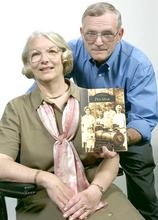 Grace College graduates Frank and Suanne Woodring were featured over the weekend in their local newspaper, the Hagerstown (MD) Herald-Mail, for a new book they have published on the history of a local park. (Herald-Mail photo by staff photographer Yvette May)

Frank, a 1967 grad with a BA in History, and Suanne (Kuhn), a 1970 grad with a BS in Elementary Education, own and publish a local history magazine. Here is the story by Herald-Mail writer Marlo Barnhart.

With the first concert of the 2005 season at Pen Mar County Park just a month away, the timing for Frank and Suanne Woodring’s new book seems perfect.

The 128-page book combines nearly 200 vintage pictures with reflections by people who share memories of the park’s earlier days as well as its rebirth, according to the Woodrings, who are best known as the publishers of the Maryland Cracker Barrel magazine since 1991.

The official release date of the book was March 7 and it has been selling well, Frank Woodring said. Originally, 1,200 books were printed, and a reprinting is possible.

The book is available at Borders, Books ‘N Things, Waldenbooks and the Washington County Hospital gift shop. It also may be purchased via the Internet at Arcadiapublishing.com or through the Cracker Barrel office.

The subject matter seemed a natural for the couple, who separately and then collectively developed a love of history.

“We met so many people who are so passionate about this park,” said Suanne Woodring. Last summer, they decided a book would be the ideal way to share their stories and a wealth of pictures with history buffs as well as those who have fond personal experiences at the park.

Pen Mar sits atop the Blue Ridge Mountains at an elevation of 1,400 feet. The park was opened in 1877 by Col. John Mifflin Hood, then president of the Western Maryland Railway. He was inspired by the view spanning 2,000 square miles across the Cumberland Valley and determined to make it available for lots of people to enjoy.

Pen Mar – near the border of the neighboring states of Maryland and Pennsylvania – soon became a magnet for visitors. Hotels and boarding houses began to appear and people flocked to the park for amusement, relief from the summer heat and family vacations.

Accessible by railway, cars and buses, the park flourished until the advent of gas rationing during World War II. It closed in 1943 and didn’t open again until 1977.

The book is broken into five chapters, Frank Woodring said. The first three chapters deal with getting there, the adventures available once at the park and what it was like to stay there, he said.

Born in Waynesboro, Pa., Frank Woodring, 62, first came to Maryland when his dad became chief of police in Emmitsburg, Md.

He taught school for 24 years at Heritage Academy, he said.

Suanne Woodring, 58, was born in Morgantown, W.Va., and came to Funkstown at age 5 when her father was drawn to the area by Fairchild. She, too, became an educator and taught for 31 years, retiring in 2001.

“We love to travel and often head south on vacations,” Frank Woodring said. “We tend to find ourselves at historical places. Otherwise, we figure, why go?”

That passion seems to be shared by many people who have come to the Woodrings’ book signings.

“Young and old, they want a piece of that history,” Frank Woodring said.

Many book buyers say they have either been to Pen Mar or heard their parents and grandparents talk about it, they said.