Grace Groups Provide A Sense of Belonging at Wooster 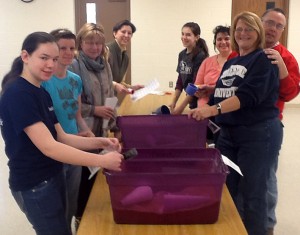 Grace Groups at the Grace Brethren Church, Wooster, Ohio, often gather to do ministry together.

“People are now aware of each other’s needs and feel a sense of support for other people as well,” reports Steve Kern, associate pastor of spiritual growth at the Grace Brethren Church in Wooster, Ohio (Bob Fetterhoff, senior pastor).

What brought about this change? Kern credits it to the creation of Grace Groups, which began in the fall. According to Kern, Grace Groups are “essentially home study groups, but with not just the study as the emphasis. It would also be on connection, on the fellowship aspect, and then with an outreach element as well.”

“We have about 18 Adult Bible Fellowships (ABF) meeting on Sunday mornings, impacting about 500 lives on any given Sunday,” says Kern. “Meanwhile, we still have hundreds of other people who are not involved in an ABF, and our concern over the years has been that they become involved in some sort of group experience.”

So far, the result has been extremely positive. “We currently have 19 Grace Groups with 185 people. Of those 185, more than 100 were not part of our ABFs in the past, or haven’t been recently,” Kern reports.

In addition to ministering to each other, the Grace Groups reach out to the community. “Every group is encouraged to do something that touches those outside of Christ in a meaningful, compassionate way, but also in a way that somehow brings the truth of the gospel to people that are impacted,” he adds. For example, at Christmas, some of the Grace Groups participated in the Angel Tree program. Others donated gift cards to people in need.

The Adult Bible Fellowships meet on Sunday mornings, but Grace Groups “have the freedom to meet whenever and wherever best suits the schedule of the leader and the participants,” explains Kern. “Virtually every day of the week is represented.”

“It’s been exciting to see people who historically have only been Sunday morning, big worship service experience people finally step out from the shadows and into relationships with other believers at our church,” Kern concludes. – by Andrea Skowronski