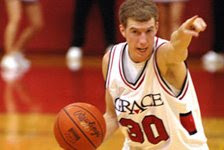 From the Warsaw (IN) Times-Union:

Lancers To Clash With Knights

Kessler believes the Lancers, however, are a better basketball team.

“They’re a little quicker and they’re more of an athletic team,” Kessler said of the Knights, who Grace will play Thursday at 1:45 p.m. CST at Keeter Gymnasium on the campus of College of the Ozarks near Branson, Mo. “But I think we’re a better basketball team. I like our chances.”

Warner Pacific, a school in Portland, Oregon, received an at-large bid to the 32-team, single-elimination tournament. The Knights were ranked 15th in the final NAIA poll and sport a 21-8 record.

The Lancers, who advanced to the Elite Eight of the tournament last year, received an at-large bid after being ranked 20th in the final poll and take a record of 20-10 into tournament play.

When the Lancers and Knights square off Thursday afternoon, it will showcase discipline and structured offense against a fast-paced, run-and-gun style of play.

To read the remainder of the story, click here.