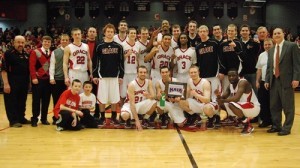 WINONA LAKE, Ind. – For the first time in the Orthopaedic Capital Center’s history, the nets have been cut down.

Grace punched its ticket to the NAIA Division II Basketball Championships in Branson, Mo., with a 79-75 thriller over Saint Francis on Wednesday night, taking home the 2012 MCC Tournament championship.

The Lancers (24-7) earned their first conference tournament title in program history and their sixth trip overall to the NAIA DII Championships – including four of the past five seasons.

Bruce Grimm Jr. proved unstoppable all night as he dazzled his way to 35 points, 5 rebounds and 5 assists.

The OCC crowd was at fever pitch from the tipoff and had little reason to drop its level of excitement in the title bout.

The Cougars (21-12) grabbed their largest lead of the game early with a 14-8 advantage after six minutes of play. The Lancers soon after leveled the score.

Grimm added six of his 16 first-half points in the final 2:10 of regulation, and his driving layup in the waning seconds gave Grace a 36-31 lead at the halftime break.

Saint Francis fired back to start the second half, however, and ended a 12-2 run with back-to-back 3-pointers to take a 43-40 lead.

The teams played about as evenly as possible for most of the second half. Over a 14-minute stretch in the half, the lead was never greater than three points in either team’s favor.

Grimm finally began to swing momentum Grace’s direction when he pulled up for a three-pointer from the top of the key to put the Lancers ahead 63-61 with six minutes to play.

Greg Miller muscled his way to a pair of low-post buckets on Grace’s next two possessions as the frenzied OCC crowd erupted with the home team leading 67-61 and only 4:33 remaining.

After a basket from the Cougars, Columbus banked in a shot in the lane, and Grimm scored twice to establish a 10-point lead for the Lancers heading into the final minute.

Saint Francis scored from beyond the arc to cut the gap to seven points, but Jacob Peattie leaked free for a fastbreak two-handed jam on the inbounds pass out of a Saint Francis timeout.

The Cougars continued to foul over the last minute of play and managed to slice Grace’s lead to 78-75 after a contested three-pointer from Q Owens swished through with 10 seconds left.

But Elliot Smith hit 1-of-2 from the free throw line with 6.7 seconds on the clock, and Saint Francis misfired on a desperation shot in the final seconds as Grace 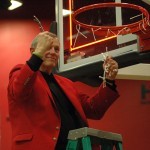 held on for the tournament championship.

Grimm’s 35 points tied a career high he set earlier this year in a double-overtime win against Bethel College. He finished 12-of-25 from the field and a perfect 10-for-10 from the free throw line while playing all 40 minutes of the game.

The Lancers hit 55 percent from the field, including 16-of-25 in the second half (64 percent). Grace held a dominant 52-36 advantage in points in the paint and outrebounded Saint Francis by three (34-31).

The Cougars shot 43 percent for the night and were 47 percent from the three-point line. Owens led Saint Francis’ production with 24 points.

The 32-team field and the tournament bracket for the NAIA DII Championships will be revealed on Wednesday. Stay up-to-date with Grace’s draw in Branson on Grace’s official site www.grace.edu/athletics.