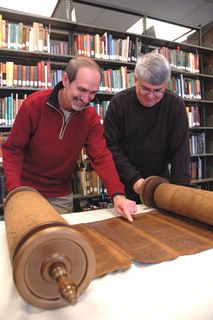 According to today’s e-mail update from the Grace College & Seminary publications office (connect@grace.edu) several important documents are on loan from Grace’s Biblical and Ancient Manuscript Center in the Morgan Library for exhibit at The Discovery Place in Charlotte, North Carolina.

Dr. Brent Sandy (pictured here with Grace librarian Bill Darr), who chairs the Religious Studies Department at Grace College, says that nine documents have been borrowed from Grace for the exhibit. Among the documents are a 16th century Torah scroll, a Sauer Bible, the first German language Bible printed in North America (1776), and an original leaf from the first printing in 1611 of the King James Bible.

For photos and more information about Grace’s Biblical and Ancient Manuscript Center, go to
<<http://www.grace.edu/news-events-articles/012406-exhibit-documents.htm>>