Grace Men Ranked No. 2 in NCCAA 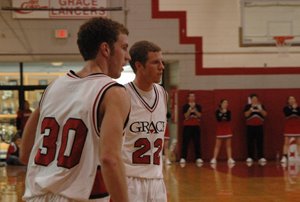 WINONA LAKE, IN – The Grace College men’s basketball team was ranked No. 2 in the country by the National Christian College Athletic Association (NCCAA) in the first ranking of the 2005-06 season released Tuesday.

The NCCAA uses the Burbridge System to rank its members, a power poll which takes into account wins and losses and strength of schedule.

Mid-America Nazarene, a team which Grace meets at the Clarke College Tournament in its next game, ranks No. 14 and Bethel College ranks No. 19.

The Lancers are 9-5 on the year and are coming off of an overtime victory against NAIA Division II No. 16 Cornerstone. Grace will play Mid-American Nazarene on December 28 in the first of three games at the Clarke College Tournament in Dubuque, IA.

Updates on Grace’s athletic program are available by clicking here.