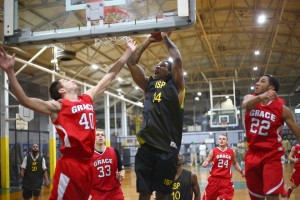 Offenders player Samson Dickens takes the ball up against Grace College’s Kyle Fillman during their game at the Indiana State Prison. Photo by Joe Rondone

The Grace College men’s basketball team was featured in Sunday’s Michigan City, Ind., News Dispatch as they prepared to play against the Offenders, a team comprised of inmates in the Indiana State Prison, a maximum security facility in Michigan City. Coach Jim Kessler sums it up at the end. “You can jump across a lot of barriers when you play on the court, and you leave respecting each other,” he said. “That’s the way it’s supposed to be and that’s the way we feel when we come here and play. When we leave, we think; there but by the grace of God go I.”

A portion of the story appears below. Click here to read the complete article.

MICHIGAN CITY — It’s a cold fall day in late October, but the hum of activity within the entrance of Michigan City’s Indiana State Prison makes things seem warmer indoors. That is until you reach the stark, blank steel that truly separates you from the outside world.

Today, a team of young men is entering through a series of locks that most men see as the last stop before freedom is lost. But, these men are different.

Grace College’s team is entering through the prison gates to play a local basketball team that never travels, they only play home games. They are playing The Offenders, a team comprised of all inmates at the maximum security prison. In fact, everyone involved with the team – the coach, the referees, the color analysts and statisticians – is incarcerated in the northern Indiana correctional facility.

Wide-eyed, young college basketball players anxiously talk amongst themselves as they are led through metal detectors, body searches and prison personnel on their way to the recreational center basketball court, The Offenders home floor.

But, some have been here before, Grace College’s Coach Jim Kessler has been playing exhibition games against Indiana’s prisons teams since he played ball for Grace in 1967.

“When you go through those doors, as they clang shut, for some of these men, that’s the first time that they can’t just leave if they want to,” Kessler said. “I remember those feelings.”