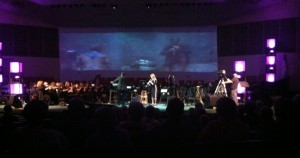 “Gabriel’s Oboe,” a solo from the film score of the 1986 British film, The  Mission, was one of the numbers recorded at Sunday night’s concert by the Grace Polaris orchestra.

The audience at Grace Polaris, a Grace Brethren church on the north side of Columbus, Ohio (Mike Yoder, lead pastor), was treated to a delightful evening as the orchestra opened their recording session to the public. They were joined by big band and jazz ensembles, bells, string quartet, and more for a great evening of instrumental music featuring hymn arrangements by the church’s staff arranger, Robert Nugent and a wide variety of other material from classical to jazz to cinema.

The recording is the third in their Simply Speechless series of  instrumental recordings of sacred music that do not include vocal or choral  content. Sunday night’s session included about 10 arrangements by Nugent. The finished product should be  available for sale sometime before Christmas, according to Randy Kettering,  the church’s director of musical arts and worship.