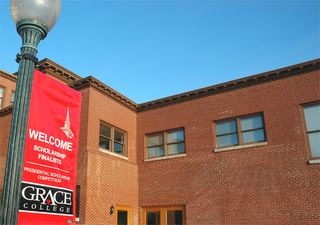 Some 86 presidential scholarship contestants and their families were on the Grace College campus in Winona Lake, Indiana yesterday and today for a competition that concluded at noon today (Saturday.)

The students interviewed with faculty members, attended a dinner hosted by
Grace President Ron Manahan, and competed by writing essays and answering questions. At stake was some significant scholarship money to the Christian liberal arts school.

The average grade point average of the finalists was 3.94 (on a 4.0 scale). Their average math and reading SAT score was 1283 and the average ACT composite score was 28.4. They came from 21 different states, including Alaska, California, Hawaii, and many Midwestern and eastern states.