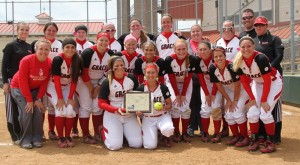 The Grace College Lady Lancers (29-30) earned fourth place in the NCCAA World Series and concluded the season with the program’s most wins since 1994.

A memorable 2014 campaign for Grace’s softball team ended on Saturday as the Lady Lancers fell 7-2 to Union at the NCCAA World Series.

The Lady Lancers (29-30) earned fourth place in the national tournament and concluded the season with the program’s most wins since 1994.

After the game, Brooke Shell was named an NCCAA All-American to cap off her outstanding junior season.

Grace was consistent in placing runners on the basepaths against Union’s pitching, but the Lady Lancers struggled to convert runners into runs. Grace notched 10 hits, but the team stranded 10 baserunners in the contest.

Brooke Shell scored Grace’s first run in the bottom of the third after reaching base on a leadoff single. After reaching third base on a steal, Shell scampered home on a sacrifice fly from Clarissa Knight. Shell’s stolen base tied the junior for the program’s career steals record. She also increased Grace’s single-season stolen base mark to 38.

Union went on to increase its margin to 7-1 before Grace’s final at-bats. In the seventh inning Hannah Adams lifted a long fly ball to the center field fence, and the ball appeared to cross the temporary fencing. But the potential three-run homer was ruled a ground-rule double as the portion of fence toppled to the ground upon collision. Knight came home to score on Adams’s hit, but the Lady Lancers’ two-out rally ended with two runners on base.

Shell finished 3-for-4 from the leadoff position, and Chelsea Whitesell was 2-for-3. Freshman hurler Hannah Adams was named to the NCCAA All-Tournament Team at the game’s conclusion.

The 2014 season under head coach Heather Johnson provided a number of milestones. Grace racked up the team’s most wins since 1994, its most league wins ever, and its first national tournament appearance since 1997.