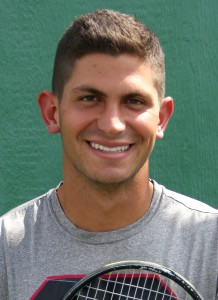 Grace tennis player, Daniel Sanchez, has been honored as an NAIA All American.

Sanchez was one of three Crossroads League players to earn a spot on the honorable mention list for NAIA All-American. The Puerto Ordaz, Venezuela, native was Grace’s No. 1 singles and No. 1 doubles player all season.

He posted a sterling 9-1 mark in singles play and was also 9-1 in doubles alongside Jose Marval.

Sanchez was also honored for his academic prowess. He joined teammates Ricardo Bedon and Ethan Grove as Daktronics-NAIA Scholar-Athletes. To receive Scholar-Athlete status, a student must maintain a GPA of at least 3.5 and have reached junior or senior academic status. Grace’s three NAIA Scholar-Athletes were tied for the most in the Crossroads League.

The Lancers finished the 2015 season with a 7-3 record in the fall, including 6-2 in league play. Grace has claimed a share of the Crossroads League championship in two of the past three years under head coach Larry Schuh.