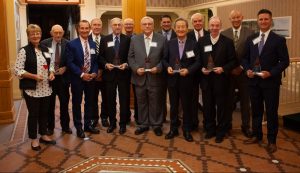 Grace Theological Seminary, Winona Lake, Ind., recognized 17 distinguished alumni and friends at the first Seminary Reunion and Award Dinner on Oct. 4. All seminary graduates were invited to enjoy food and fellowship while honoring the first group of Seminary Alumni Award Winners. Each of the men and women awarded has advanced the mission of Grace College and Theological Seminary through their lives and ministry.

Kent served as president from 1975 to 1985. Under his leadership, Grace began new graduate programs in missions and achieved regional accreditation for the seminary. During his tenure at Grace, Kent was a prolific writer and New Testament theologian and scholar. He served as a translator for the New International Version, and has authored 21 books.

Davis became president in 1986 and served through 1993. During this time, he was an esteemed archaeologist, a recording musician, and a theological writer. He has contributed to numerous articles, dictionaries, and journals including Harper’s Bible Dictionary, The Wycliffe Bible Encyclopedia, and Hermeneutics, Inerrancy and The Bible. He is still writing to this day, currently working on a commentary on Jonah.

Manahan served as Grace College and Seminary president from 1994 to 2013. Under his leadership, Grace was recognized nationally as one of the first colleges to develop a three-year bachelor degree program for all its majors. This innovation attracted the attention of Congress, state legislators, and national media. In 2011, Manahan championed higher education affordability and transparency to the Congressional Subcommittee on Higher Education and Workforce Training in Washington D.C.

Three individuals were honored as Grace Seminary Young Alumni of the Year for their significant contributions to the ministry in less than 15 years since graduation. The award was given to Mark Artrip (MA 05), of Hilliard, Ohio; Zac Hess (MDiv 13), of Columbus, Ohio; and Ashley House (MA 13), of Southeast Asia.

The Seminary Honorary Alumni award was given to two individuals: Doug Schmidt, Chris Brooks. Although they do not hold a degree from Grace, these two individuals have advanced the mission of Grace as faithful partners and supporters in ministry.