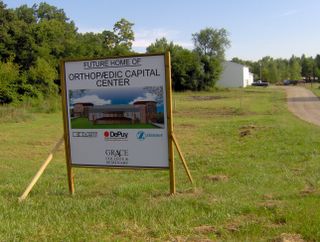 The following story appeared in this morning’s Fort Wayne (IN) Journal-Gazette newspaper:

Grace College announced plans Thursday to build a 56,000-square-foot convention and community center on its Winona Lake campus, a center named for three biomedical companies that contributed significantly to the cost of the building.

The $7.3 million community center will be named the Orthopaedic Capital Center, in recognition of the $1 million contributed by each of the community’s three largest employers: Biomet, Zimmer and DePuy Orthopaedics Inc.

The building will provide space to conduct events with audiences of up to 2,800 and will also be used for intercollegiate athletic events and conferences.

And in constructing the parking lot for the center, the Kosciusko County college will also clean up a long-abandoned brownfield area adjacent to the site for the building.

“It appeared this was a wonderful way to bring good to the community … be good for our campus, and we like the fact that we can practice stewardship in this way,” said Ronald Manahan, president of Grace College.

The proposed parking lot will occupy a four-acre piece of land that served as a dump for the defunct Gatke Parcels Corp.

From the 1950s until 1974, metals, asbestos, lead and other chemicals were dumped there, said Kevin Davis of the Indiana Brownfields Program.

The debris was left uncovered and the land seized by the county for unpaid taxes. Grace College will lease the property on a long-term basis, and the state gave the school a low-interest loan to remediate the property.

The school plans to cap the site, using natural and man-made materials such as gravel and asphalt, which meets Department of Transportation standards for durability, Davis said.

The school is also converting about three-quarters of an acre next to the brownfield site back to its natural state to give the community more green space, according to the release.

As a Christian college, Grace is concerned with being a good steward of the environment and conveying that value to its students, Manahan said.

“Our ability to participate and pay for the remediation is a way for us to practice one of our educational values,” he said. “We’re committed to that because it is something that is good for our community, and we’re glad to be a part of that.”

The Orthopaedic Capital Center is the last project in the first phase of Grace College’s capital campaign, “Invest in Leadership; Impact the Future.” The campaign began in 2000, with the goal of raising $40 million in seven years, according to the release.

Early ideas for the community center were discussed about four years ago, Manahan said, and the building will have uses for both the small Christian college and the larger Kosciusko County community.

There is little convention space outside of Fort Wayne in northeast Indiana, but officials at the newly expanded Grand Wayne Center said they do not believe the Orthopaedic Capital Center will have a negative effect on Grand Wayne’s usage.

“I’m sure that will be an asset to the Warsaw community,” said Gary Wasson, director of operations at Grand Wayne Center. “It’s not really the size to compete with us.”

The school conducted a feasibility study to determine the need and support for a new community center of this size, according to a written statement from the college.

According to that study, the community center would be able to support about 95 percent of events anticipated by community leaders.

Some of those needs included space for theatrical productions, musical and concert events, convention and exhibition space and space for the local orthopedic industry to hold training and other meetings.

Monika Gibson, associate communications manager for DePuy, said the new community center will give the orthopedics company an auditorium large enough to accommodate the company’s 1,200 employees.

“That’s a huge benefit for DePuy,” Gibson said. “(Now) even if we wanted to, we couldn’t have a large employee meeting.”

Manahan said the project has truly been a partnership among Grace, the orthopedic companies, Kosciusko County and the town of Winona Lake.

Construction on the Orthopaedic Capital Center is expected to take about 14 months, and it would be open for use in 2007, Manahan said.