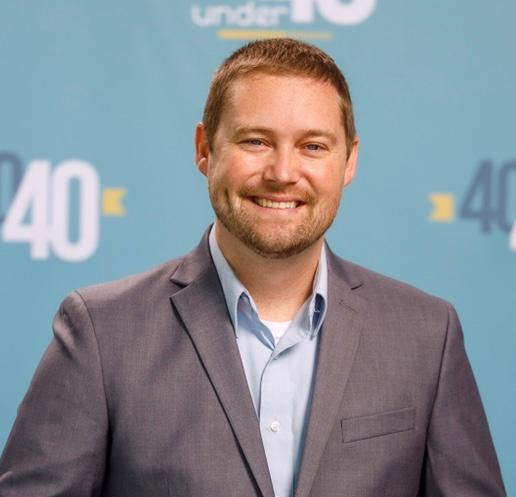 Justin Kimbrell grew up in long term care — sort of. When he was in elementary school his mother began working as the director of nursing in a care facility, and he spent much of his free time there, often volunteering to serve. He says it was like having an “extended family of grandparents.”

It only seemed natural that he enter the family business.

At 23, Justin received his license to be a nursing home administrator. He served in four different leadership positions in senior living communities including at Healthwin, a long-term care facility in South Bend, Ind., where his mother had also worked. With experience in both assisted, long-term and independent care, he ultimately became the chief operating officer at Healthwin.

Justin accepted the position after initially turning down the opportunity to interview. But a second look at the job description drew him in. Along with the usual requirements of experience, leadership skills, the job required candidates to “be a believer and follower of Christ,” Justin recalled.

When Justin started his new position in July of 2020, he was thrust into the challenges of COVID-19. Like the rest of the nation, Grace Village’s workforce was greatly impacted. He says that the healthcare industry saw an 18% decrease as workers left to pursue careers in other areas. “It makes me so proud of our staff,” he said of the Grace Village workers who remained. “They’re here for our residents.”

As he continues in this role, Justin has big plans for Grace Village. He hopes to add memory care to the facility, making Grace Village a Continuum of Care Retirement Community (CCRC). He is also initiating a refocus on their mission as they continue to serve the community. The mission statement, as it appears on GraceVillage.org, is: “Incorporated in 1974, Grace Village is dedicated to preserving the richness of life for seniors in a comfortable and secure Christian setting. Grace Village is affiliated with the Fellowship of Grace Brethren Churches and seeks to do all in the spirit of Jesus Christ.”

Realizing that many people believe that living at the Village is not affordable, Justin hopes to combat that misconception. “For realigning and focusing on our mission we did a financial focus,” he stated, indicating that financial support is available for seniors in the community with the help of the Caring Friends Fund, “but also a spiritual focus. We began implementing daily prayers over the intercom.”

The best part of Justin’s day, he said, is walking through the building and connecting with residents and staff. He especially appreciates the wisdom of the residents. He often he prays for the community as he walks.

Working in a retirement community requires attention. Justin said it is important to connect with, take care of, and help seniors as much as possible. “It’s not always easy,” he said, “but it’s…a calling”