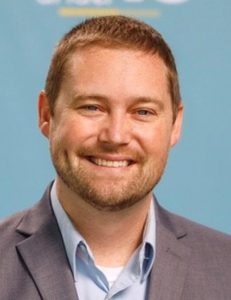 Kimbrell follows 24-year veteran CEO Jeff Carroll, who will stay on in an advisory role until the end of the calendar year. Kimbrell is a native of Edwardsburg, Mich., and brings over 12 years of experience in long-term care facility administration to the post at Grace Village.

“I grew up in the long-term care industry,” states Kimbrell, referring to the fact that his mother worked in this field for many years.

“Growing up in this environment drew me into the industry and has guided my career choices and influenced me in many ways.”

Kimbrell is a licensed health care administrator and has operated skilled nursing and assisted living facilities in Michigan and Indiana. He and his wife of 15 years have two children. A graduate of Grand Valley State University, Kimbrell is a big fan of NCAA football. He will have the advantage of learning from longtime Grace Village CEO Jeff Carroll during the transition period.

Carroll started his career at Grace Village 24 years ago and has been CEO for the last 22. He successfully led the organization through a financial and managerial restructuring that allowed for significant expansion of facilities and programming. He founded the annual golf outing, now in its 11th year, which has raised more than $45,000 for special projects and increased awareness of Grace Village throughout the region.

Carroll expressed his appreciation of the Grace Village board for their careful oversight of crucial matters and to the Warsaw/Winona Lake community for the confidence they have placed in Grace Village over the years. Even more fundamental, however, is Carroll’s appreciation of help from a higher power during his tenure, noting that “the Lord has enabled us to expand and grow during the 24 years that I have been at the helm of Grace Village.”

Carroll and his wife, Pam, look forward to enjoying some time off and being more involved with their 10 grandchildren. Activities to recognize and celebrate Carroll’s long service to Grace Village are planned closer to the time of his retirement.