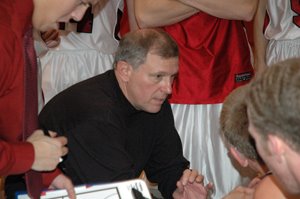 Jim Kessler, head coach of the Grace College men’s basketball team, was honored this week by the National Association of Basketball Coaches (NABC). The group informed Coach K that he is a winner of one of four Guardian of the Game Awards, the highest recognition that can be presented to a NABC member. Kessler will receive the Guardian Award for Service.

Kessler was also featured in a three-page article, along with Bethel head coach Mike Lightfoot, in the newest edition of Sports Spectrum Magazine (March-April 2006). Titled “Winning Big,” the article focuses on Kessler’s and Lightfoot’s achievements on and off the court during their runs toward 500 career wins. To read more about Kessler’s honors, visit www.grace.edu.