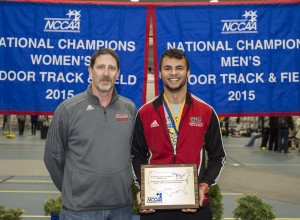 Grace senior Donovan Graham was honored as the recipient of the 2015 NCCAA Wheeler Award for indoor track.

The Wheeler Award is the highest individual honor given to a sport by the NCCAA, recognizing one student-athlete for outstanding Christian character, athletic and academic achievement and community service.

“Donovan [Graham] has been a key contributor to our team since he arrived in campus. Over the past four years he has grown as a person, as a leader and as a competitor,” said Grace head coach Jeff Raymond. “He is well deserving of this prestigious award.”

Graham is the third Lancer to win the NCCAA Wheeler Award for track and field, joining Jonathan Rex (2014) and Tim Sprankle (2002).