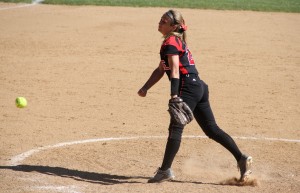 The Lady Lancers (32-27) fell 2-1 in the seventh inning to the No. 1 seed Judson, eliminating Grace from the double-elimination tournament. Thursday’s loss marked the first time since April 3 (34 games) that Grace scored less than three runs.

The Lady Lancers enjoyed a season of superlatives under head coach Heather Johnson. Grace had its first 30-win season in 21 years and its first winning season in 18 years. The 2014 and 2015 campaigns marked the first consecutive national tournaments in program history, and Grace also tied for the program record with 19 league victories. Statistically, Grace set the record for most doubles (88) and RBIs (317) in a season.

Grace, who scored three runs in the first inning of both games on Wednesday, looked to continue that trend against Judson. The Lady Lancers loaded the bases with two walks and a single in the top of the first, but the side was retired with a strikeout.

The game remained scoreless through the first three innings. Judson finally broke through the strong pitching of Hannah Adams, using a double, a bunt and a single to take a 1-0 lead in the bottom of the fourth.

Grace’s offense, which came into the game averaging over 6.0 runs/game, struggled to pick up momentum after the first inning. The Lady Lancers did not move a baserunner past first base between the second and fifth innings.

Momentum swung back to Grace’s side in the top of the sixth. Samantha Johnson and Chandler Elliott singled, and Ashley Kleinbub placed a single down the left-field line. Johnson turned the corner at third and beat the throw at home to tie the game at 1-1. The Lady Lancers still had runners on second and third with one out, but Grace was unable to plate the go-ahead run with two strikeouts.

The Eagles threatened to take the lead in the bottom of the sixth, loading the bases with two outs. But Alex Shipley, who came in as a relief pitcher in the fifth inning, got the final batter to ground out to Brittany Turner.

Grace was poised to pull ahead in the top of the seventh, loading the bases with two singles and a walk. But Elliott grounded out to third to preserve the 1-1 tie. The Eagles made the Lady Lancers pay in the bottom of the seventh, using three straight hits to win the game in walkoff fashion, 2-1.

Elliott and Johnson each batted 2-for-4, and Knight was 1-for-2 with two walks. Adams pitched four strong innings to start the game and allowed four hits and one run, and Shipley tossed the final innings in relief.

Brooke Shell graduates as the program’s most prolific offensive player. She leaves Grace as the career leader in hits, runs, batting average, triples and stolen bases.