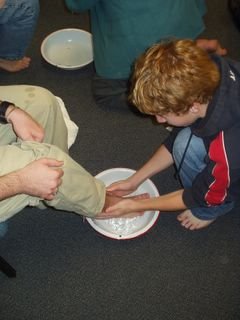 At this Easter and Passion time of year, most Grace Brethren churches are observing the Brethren (and biblical) practice of three-fold communion, which includes the feetwashing, the Fellowship Meal, and the observance of the Lord’s Supper. Pastor Scott Distler of the Grace Brethren Church of Lititz, PA, included the following warm personal anecdote in a recent e-mail to his congregation.

OH, NO! GRANDPA’S COMING TO COMMUNION

My Grandpa Distler was part of the “IFCA”–an organization called the “Independent Fundamental Churches of America.” I use to like to tease him and say that it stood for, “I Fight Christians Anywhere.”

He pastored churches in New York, Ohio, Illinois and Michigan and he was a tough cookie. My Grandpa was the type of person who, if someone was preaching in his church and said something my Grandpa did not agree with, my Grandpa would sit him down and finish the sermon for him.

My Grandpa was thrilled that I was pursuing the ministry myself. Yet, it is very much of an understatement to say that he was disappointed when I joined the Fellowship of Grace Brethren Churches (the FGBC) rather than becoming an IFCA pastor.

The other difference was in communion. While the IFCA churches took part in the bread and the cup, the FGBC add to this the elements of the love feast and of foot-washing. My Grandpa struggled with that. He was sure that it was an addition to Scripture that was not needed and that it even bordered on being unbiblical.

At the Grace Brethren Church I was on staff at in West Milton, Ohio, during my years in youth ministry, we celebrated communion just two times a year–the Sunday night before Thanksgiving and on Good Friday.

One weekend my Grandpa (who was living in California at the time as a superintendent of a rescue mission) surprised us with a visit. Guess what Sunday it was? It was the only Sunday of the year that we celebrated communion. I was a nervous wreck. I did everything I could to talk my Grandpa out of going to church that night. But to my dismay, he insisted on attending.

My Grandpa did not participate in foot-washing. He just watched. I tried to read his mind by the look on his face, but to no avail. Then we moved to the love feast. We shared a small meal and then had an extended time of testimonies before the bread and the cup.

I didn’t hear much of what anyone was saying. I was too preoccupied trying to figure out if my Grandpa approved or if he was convinced that his grandson had abandoned the faith.

Then, my greatest fear became reality. My Grandpa stood up. My stomach was now up in my throat. I could almost hear what was to happen next. My Grandpa was going to tell my Senior Pastor and my whole church that they were all practicing an unbiblical act and I, in turn, was going to get fired.

But to my surprise and delight, my Grandpa said just the opposite. He admitted to the whole church that he had come that night very skeptical and committed to finding fault in the way we were practicing communion. But instead he said that he had never sat through a more moving and worshipful experience in all of his life.

He ended by saying how proud and glad he was that his grandson was part of such a wonderful church. From that day on, my Grandpa had no problem with me being part of a Grace Brethren Church.