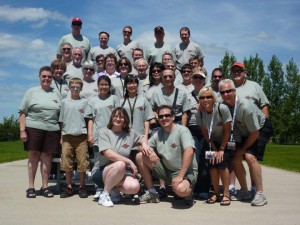 The Great Canadian Adventures is a missions trip combined with evangelism training.

The Great Canadian Adventure has never been so adventurous, with four different places to focus on as the Grace Brethren in Canada hope to catalyze church planting in the Toronto area and to strengthen the two churches there.

This missions trip and evangelism-training week will be held June 16-22, 2013, in Toronto, a vastly multicultural city made up of vibrant and distinct neighborhoods including Little Italy, Chinatown, Greektown, Little India, and more. It is Canada’s largest city and the provincial capital of Ontario.

The Great Canadian Adventure (GCA) has been an annual event for the Canadian Grace Brethren congregations since 1997. It has provided jumpstarts for ministries across the country. This year’s focus on the Toronto area of Ontario promises to be no different.

A day will also be spent in neighboring Kitchener and Waterloo – twin cities that are home to two prominent universities as well as many of Canada’s leading high-tech companies.

The week will be filled with opportunities to partner with existing churches, help discover new soil for future churches, to be trained in process evangelism, and to be encouraged to see the world. There will also be time to explore Toronto, one of the most cosmopolitan cities in the world, or to see sights such as the CNN Tower or Niagara Falls.