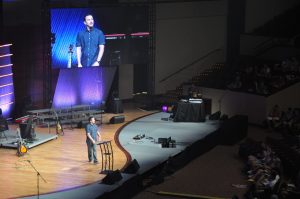 After describing the resolve of Jesus, Greg Stier invited those in the audience who had never considered it, to follow the man who gave up everything to die on the cross.

“Jesus was resolved,” Greg Stier told the opening night audience at Momentum 2018. “He endured the ultimate suffering to build a relationship with those who hated him.”

Stier, the founder of Dare 2 Share Ministries, shared how Jesus was “that embarrassing friend.” He noted that He was not wimpy, but he was strong and resolved. Stier defined resolved as “to decide firmly on a course of action.

Stier described the punishment Jesus received as he went to the cross. “With those scarred hands, he’s offering you a free gift,” he told the audience of students and ministry leaders from around the country.

With that, he shared the plan of salvation, noting that “life with Jesus starts how and lasts forever.”

The evening session, held in the Chapel Auditorium on the campus of Indiana Wesleyan University, Marion, Ind., kicks off a week of focusing on standing strong in faith because the Sovereign Lord helps. The theme is based on Isaiah 50:4-7.

The event opened with rousing worship songs led by the Jordan Howerton Band, who have led worship at Momentum for the last several years. 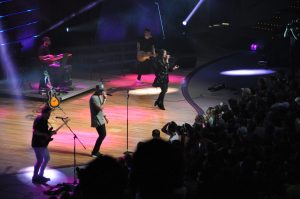 Ed Lewis, president of CE National, which hosts the conference, was a special guest speaker, encouraging students to initiate conversations with others this week, in order to share Christ.

Wednesday kicks off early with prayer on the Quad. Thirteen Power Tracks at 9:30 a.m. cover a variety of topics and are followed by the main session at 10:45, where Clayton and Sharie King, are the speakers.

Main sessions are being live-streamed and may be accessed by clicking here.