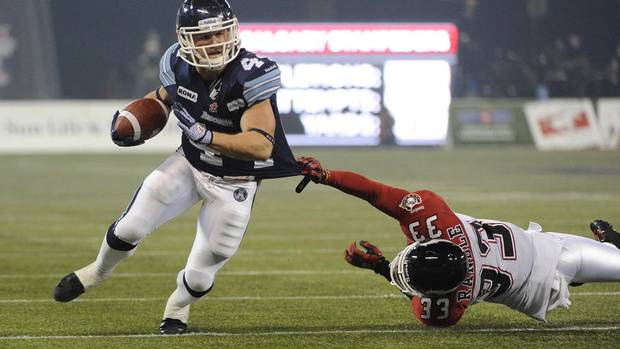 Argonauts #44 Chad Kackert manages to slip past a grasping Stampeders #33 Chris Randle during the CFL's 100th Grey Cup game between the Toronto Argonauts and the Calgary Stampeders at the Rogers Centre on Nov 25 2012. (Fred Lum /The Globe and Mail)

A former player for Grace Brethren High School in Simi Valley, Calif., Chad Kackert, was named most outstanding player of the 100th Grey Cup on Sunday. According to the Globe and Mail, he was not even in the starting lineup for most of the first half of the season, but became a standout in the team’s run to it’s first Canadian Football League championship since 2004.

The Simi Valley, Calif., native led the Toronto Argonauts to a 35-22 victory over Calgary.

According to the Grace Brethren Church website, “Kackert was the star of the show for the Lancers at Grace Brethren for four seasons from 2001 through 2004 culminating with a CIF SS Division 12 Championship and a 13-1 season. Kackert won numerous awards including an All American award from Prep Nation. He went on to play at the University of New Hampshire for then Offensive Coordinator Chip Kelly (now the Head Coach at Oregon).

Chad has always been about absolute effort whether in the weight room, the football field or on the surf. He was a pleasure to coach and has continued to honor Grace Brethren football with his performance said Terry Gourley, former Head Coach at Grace Brethren.

Kackert served as strength coach at Grace Brethren during the off season last year as he looks to continue his legacy of hard work and defying the odds.”