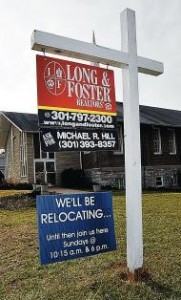 From the Hagerstown, MD, Herald-Mail:

HAGERSTOWN — High utility bills and other operational costs have prompted officials at Grace Brethren Church on Spruce Street in Hagerstown to search for a new place of worship.

The Rev. Harald Bjerga said area residents have attended the church since it opened in 1939.

“It’s fairly simple,” Bjerga said. “Utilities and maintenance on a building this size — it’s more than half a block — are more than we can deal with.”

Bjerga said the church, which holds up to 300 people, will remain open until officials find another site.

The asking price for the Grace Brethren building is about $1.63 million, said Michael Hill, of Long & Foster Realtors. That price includes the church, parking lot and a three-story building on the property.

The primary structure was built in 1900, according to documents from the Maryland Department of Assessments and Taxation. The property’s appraised value is $2.43 million.

Bjerga said the church rented a portion of its space to Washington County Public Schools for classroom use last year after students at Antietam Academy were displaced by a fire in March.

He said the school system paid the church $3,000 a month to rent offices and Sunday school classrooms on the first floor.

“We weren’t looking to make money,” Bjerga said of the church officials’ decision to rent the space. “They asked us what the utilities cost per month and gave us a little more. We wish they would have stayed.”

Washington County Public Schools spokesman Richard Wright said the Antietam Academy students were moved in the fall to modular classrooms on the South Hagerstown High School campus. A new building to house Antietam Academy is under construction and is expected to open in early 2011.